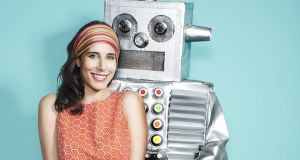 Pucker up to your technology and get down with a robot. If you’re so connected to your online relationships that you quiver with anticipation every time your phone pings or vibrates, then this is for you. Facebook is working to satisfy technolust with a “full sensory and emotional experience”, according to Mark Zuckerberg, who says he wants technology developed so “anyone can experience anything,” including virtual reality hook-ups with steamy sigh-ber “lovers” programmed to give continuous sexual pleasure.

The company has launched a fundraising campaign on Indiegogo “to help you get past first base”. The chatbots would be programmed to remember everything the human lover has said and done so that it can recall and respond appropriately – or inappropriately – whichever you wish.

It’s the next logical step up from blow-up dolls and Japan’s expensive silicone wives for rent. In China, these dolls really do become wives due to the demographic of more men than women, as a result of the one-child we-don’t-want-baby-girls policy.

Virtual lovers aren’t a new idea. Where would science fiction be without them? In Barbarella, the villain puts Jane Fonda into his “Excessive Stimulator” machine to torture her with pleasure. Instead she breaks the machine, emerging refreshed.

Robotic sex-slaves are a male fantasy in cinema. They appear in Blade Runner; AI Artificial Intelligence with its Gigolo Mechas; The Stepford Wives who were altered to behave like sexbots; Austin Powers: International Man of Mystery which had Fembots with breasts that shot bullets; and Woody Allen in Sleeper who had his brain, and something else, blown when he entered the Orgasmatron.

In Her, Joaquin Phoenix falls in love with his computer which has a voice played by Scarlett Johansson. The actors played in the film without ever meeting one another.

Hooking up online without physical intimacy has become reality. Nearly one in four men who participated in the recent Irish Times Sex Survey use dating apps and one in three 17 to 34-year-olds admitted to having cybersex, while 29 per cent of respondents thought tech-gadgets had become the third person in the bedroom.

He aims to create apps and interactive services “that conduct entertaining, interesting, erotically charged conversations with virtual lovers or friends” and that will “help users to improve their own talk-dirty skills”. The amorous bots (not bods) will be programmed to please you. “Conversations with our chatbots will be great fun,” says Levy. If you call talking to a software programme “fun”.

Ever wanted to change your partner’s or spouse’s personality without changing your partner or spouse? Chatbots will allow you to modify your virtual lover’s personality. Want a post-coital chat about world events? This lover won’t fall asleep on you.

In Japan last month, two robots tied the knot. Groom Frois and bride Yukirin walked the aisle in traditional outfits and shared a “kiss” before “cutting” their cake.

Sexy they were not, with their hard bodies like overgrown children’s toys from the 1950s. Yet in the world of sex-tech lovers, already inventors are creating silicone dolls with voices. Funny how it’s always men making pretend women and not the other way around. Lonely French and Spanish sailors were doing it over a century ago. They soothed their urges with dames de voyage, home-made masturbatory dolls made of sewn cloth or old clothes.

In The Sexual Life of Our Time (1908), Iwan Bloch wrote of the “fornicatory acts effect with artificial imitations of the human body, or of individual parts of that body . . . true to nature . . . in this province of pornographic technology, clever mechanics who, from rubber and other plastic materials, prepare entire male or female bodies”. The male versions squirted oil from a pneumatic tube (yes, there were gay sailors).

Laugh not. The amateurish black and white cartoon drawings of chatbots on their website could eventually be developed to a point where they bring users beyond first base – all the way to home plate.