‘All your old shite about religion, that’s all pram-baby talk’

Michael Harding: I presumed he didn’t have running water in whatever galvanised cottage he sheltered in on the side of some Leitrim mountain 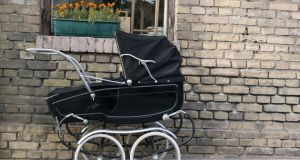 ‘In my lifetime,’ he confided, ‘a lot of men who were confined to prams for long periods never got over it’

What exactly has writing to do with loneliness? That’s a question I couldn’t answer when someone asked me, in a writing workshop in Listowel last summer. And I’ve been thinking about it ever since.

I was thinking about it in January, in Giovanni’s restaurant in Carrick-on-Shannon; a traditional old-style chip shop, with gleaming tables, and tiled floors where the chips are always fresh and the Diavola pizza is a work of art. But most of all I like it because it’s anonymous. I sat there for ages during the bad weather with cups of tea, watching the light on the street outside come and go as the snow fell and stopped and fell again.

One day a young man with a long scraggy beard came in and sat beside me. I was alarmed because clearly he was determined to interrogate me.

“Are you a pram baby?” he inquired.

I wasn’t sure what he meant.

“In my lifetime,” he confided, “a lot of men who were confined to prams for long periods never got over it. And I seen you on the Tommy Tiernan Show recently talking about religion and I says to myself, there we go again Patsy, another pram baby!”

“Patsy,” I said, presuming it was his name, “are you having something to eat?”, as the waitress came with my plate of chips and beans.

I hoped the question might encourage him to go away. But it didn’t.

“Thanks,” he said, without shame, “I’ll have a mug of tea.” My strategy had backfired.

“All that old shite about religion and God, that you and Tiernan go on about,” he declared, “that’s all pram-baby talk.”

His beard and hair were dirty. I presumed he didn’t have running water in whatever galvanised cottage he sheltered in on the side of some Leitrim mountain.

“The compulsion to write goes back to the pram,” he explained. “The afflictions of the storyteller are nurtured in childhood loneliness. You sit alone all day putting words on a page. But it’s torture. And the only reason you do it is because you were stuck in a pram at an early age, and isolated from the world so severely that you began inventing things: like god. Am I right or wrong? And then after the god period, you start into other stories. Am I right or wrong?”

In fact I do remember the pram; and being pushed into the garden when I was an infant, for such long periods of time that I ended up thinking I was a tree. And I was so lonely out there that I longed for other humans and when I heard distant voices, I thought they came from heaven.

When I was 10 years old I heard a Christian Brother say that saints were special because they heard voices.

“But brother,” says I, “I hear voices all the time. Isn’t that why we have ears?”

“Don’t be smark-alecky with me, ye pup-ye,” the brother replied, and he opened the palm of his hand and slapped me on the cheek so intimately that I could smell his aftershave.

The pram defines everything. I learned to live with loneliness. And when I grew up, what else could I do but continue in the same manner

“Do you come in here often?” the young man with the long beard asked as I ate my chips.

“Do you write every day?” he inquired.

“How well do you know Tommy Tiernan?” he wondered.

“Do you suffer with the nerves?”

By the time I had finished the chips and beans, he had stripped me of all privacy. And yet I liked him.

His face quivered with a terror that comes from being swallowed by a forest of spruce trees; and from too many years in a damp cottage, with too little money and too much marijuana and no television licence, perhaps. His hands weren’t washed and his finger nails were chaffed.

“Were you left in a pram too?” I wondered.

“Don’t talk to me about it,” he said, wincing at the memory.

“So why come to Leitrim,” I wondered.

“Humans can’t change much,” he said with resignation. “The pram defines everything. I learned to live with loneliness. And when I grew up, what else could I do but continue in the same manner. In a pram. Or a forest. In me own head. Talking to nobody and wondering where has mother gone.”

“I’m a poet,” he said, as defiantly as if he was telling me that he ate babies for his dinner.

And when he was gone there remained no doubt in my mind that writing has indeed a everything to do with loneliness. And that sometimes poetry gets born in the darkest corner of the forest.