Al Porter: ‘The most manly thing I’ve done lately? Sleeping with a woman’

How to be a Man: Patrick Freyne talks to comedian Al Porter about being the son of a sergeant, growing up gay and what it means to be ‘manly’ 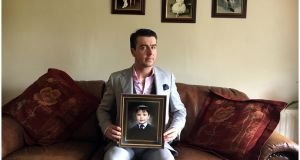 When you were younger, what did ‘manliness’ look like?
I had a role-model of masculinity in the house because my father was a flight sergeant in the Air Corps… He would come home very upright and with this great deportment that they instil in you in the Army... a uniform, slicked-back black hair. He was a very strict man and certainly didn’t encourage my dressing up in my mother’s clothes and my sister’s clothes, as I did often when I was younger.

He didn’t really encourage me going into drama until a couple of years later when he was worn down by my relentlessness with it and enthusiasm and saw that wasn’t going to dwindle . . . I felt like I struggled to be the right son for him.

Did you feel like masculinity was something you had to live up to growing up?
I was flamboyant and I am so grateful that I had a friend, Gary, who I grew up with, who was an equally flamboyant child whose mother was really very supportive of him. And Gary and I used to dress up as the Spice Girls for Halloween. One Halloween I dressed as a pregnant nun and Gary as an old woman and we went to give birth in the priest’s porch. We both liked to play with his dolls and his doll house and things like that. There was just something just more attractive about those things that are traditionally seen as for girls that I really enjoyed.

Was it difficult doing that in a macho environment?
I don’t know whether it’s a class thing but everyone was very supportive. It was like ‘That’s our Alan. He’s our Al. Don’t slag him. He’s ours.’

There was a guy who went to school with me and I remember walking down the corridor and somebody pushed me – this was when I was only about 10. He pushed me aside and kind of hit me for whatever I was doing. I maybe had some sort of a Spice Girls bag or something. And this guy who was really quite rough and tough, hit your man and told him to feck off.

And as we were walked down the corridor, he said ‘So what’s the story, are you a puff?’ and I said ‘Well, yeah’ and he says, ‘Right. Well then, stick with me because you’re going to end up getting beaten up.’

Who were your icons of masculinity?
All my male role models were female impersonators, transvestites or drag queens – Dame Edna Everage, Lily Savage and Eddie Izzard. And not just Dame Edna Everage in all her fabulousness was interesting to me, but also Barry Humphries the man, the black-haired suited Dadaist anarchic writer… and Paul O’Grady as a man and his shows.

And Eddie Izzard, I loved because I thought there was great courage and great boldness and brassiness in being a straight man in tights and a dress and high heels. And he seemed so accomplished and [such a] Renaissance Man and embodied for me masculine qualities like courage and bravery.

Masculinity is a bit of a theme in your stand-up. Why?
It’s so easy to get a laugh out of the nature of masculinity because the definition of it is so narrow . . . If there’s a man in the front row, I can get a laugh for emasculating him or flirting with him . . . I can get a laugh by suggesting his performance skills aren’t good, be that in bed or in work.

Men have this one tiny thing that they’re supposed to be, this traditional breadwinning, unemotional beast. To even suggest that a man has emotion is funny to an audience.

Masculinity comes up in my shows a lot. How are you the camp son of an Army man? How are you a flamboyant, openly gay man in a footballing, boxing working class community?

You mentioned there was a hierarchy of masculinity in the community?

I know guys who like a man but then don’t pursue it because that’s not the kind of man he could bring back to my parents. ‘I like that guy, he’s really nice [But] can you imagine I brought him home to my parents? A dancer with the little eyebrows. My dad wants me to come home with an army man.’ It’s very odd and a very self-flagellating, self-punishing attitude from the gay community and has more than once led to my own heartbreak.

Has feminism had an impact on your life?
The newer wave of feminism is great, because while it’s still tackling traditional issues such as equal pay and equal rights, it’s also delving deeper in its analysis and it’s becoming about femininity in terms of expressing your own concept of who you are and the conflict within that . . . Any sensible man ought to describe themselves as feminist from an egalitarian point of view for society.

Do you think masculinity has become more inclusive?
Oh yeah, definitely. The idea of being more emotional as a man has become more acceptable . . . It’s a bit more feminine to be inclined to disclosure. Men are supposed to be bottled up and repressed.

There’s a bench right across the house that my dad had to build for the church and they’ve got a tree planted behind it for all the young men and women, but mostly young men, who took their lives in this area. And we know that the figures are so much higher for young male suicide than women. There’s an identity crisis happening, not just in young men but in men all over this country. It’s about how you can be more than one thing.

You are more than one thing. You have this really vivid internal life where so many things are fighting for expression but the idea of being a man is too narrow. It’s often an unemotional steady hand of manliness. We’re kind of encouraged to have one identity . . . but you contain multitudes. There is more than one thing within you. You’re multifaceted. You’re complicated.

A lot of this horrible tension that men are suffering with silently is over contradicting themselves. ‘I am the pool playing, woman-loving, beer-swigging man but I also wouldn’t mind a kiss off another man sometime.’

Or: ‘I am this football-playing, bearded runner but I kind of wouldn’t mind going out to a disco and dancing to Madonna and Kylie Minogue sometime, because I kind of like that music.’

That some men feel a conflict over that is horrendous

When was the last time you felt very traditionally manly?
Oh, that was probably when I slept with a woman in Cardiff in March. I don’t think you get more traditionally masculine than that.

Did that really feel very manly?
It did, because for the first time in a long time a woman was attracted to me and I was fulfilling my biological requirements. Interestingly, she wanted me to talk to her in bed and I didn’t know what to say, so I just chose things that I knew manly men would shout: ‘For feck’s sake ref! Get into the box! Handball! You’re no son of mine!”

What’s the worst thing about being a man?
You don’t have as much choice for clothing, do you? I mean how many beauty products do you have?