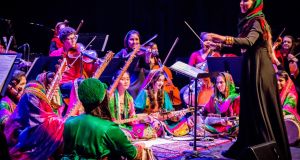 Afghanistan National Institute of Music: currently the institute has about 250 students, including 75 girls

In one of the many practice rooms of the Afghanistan National Institute of Music (ANIM), Zarifa Adeeb is playing the violin with admirable dexterity and concentration amid a group of students. While this Afghan girl has long dreamed of becoming a pop singer, her passion for classical music has emerged more recently.

When she was only one year old, Adeeb fled with her family to Pakistan where she stayed until she was 15, before deciding to return to her own country. “I came here at the end of 2014. When I was looking for a music teacher I found this music institute, where you can come and learn music in a professional way.” Zarifa Adeeb, now in her final year, has been studying the violin for two years. She is ambitious and hopeful.

However, only 10 years ago, these music lessons would have been completely banned.

ANIM was opened in 2010 by Ahmad Naser Sarmast, the current director, although its history goes back even further. The institute is rekindling a musical teaching tradition that was severely weakened over the course of recent political upheavals.

With the original creation of the music school in 1974, music became a part of the national curriculum in Afghanistan. The school held classes until 1988 when it closed due to war. It stayed shut throughout the rule of the Taliban, since music was made illegal. The school only reopened after former president Hamid Karzai came to power.

Sarmast then began the “Reconstruction of Afghan Music” project in 2008, which was funded by the World Bank. Two years later, the music school became ANIM and began teaching courses in both classical western and eastern music. These include lessons in the violin, viola, guitar, piano, trumpet and flute, as well as more traditional instruments such as the robab, ghickak, tambour drum, qashqarcha, the three-stringed sarod and the delroba.

Currently ANIM has about 250 students, including 75 girls. From these ranks young women have pooled together their respective talents to form the Zohra Orchestra, the first Afghan orchestra made up exclusively of girls. Started in 2014, this musical group held its first event at the Canadian embassy in Kabul – not exactly a small-town crowd.

Zarifa Adeeb talks about these first days: “When I first joined the school there were only five girls in total. We wanted to organise a group for women since, that same year at the institute, the boys were allowed to create both rock and pop groups. It was like a competition. So we created a choir. As time went on, other girls came to join the group. That’s when, only three weeks later, we changed from a singing group into an orchestra.”

A teacher at the institute, Mohammad Murad Sharkhush, says: “The original idea for the Zohra Orchestra came from a young girl called Mina who was a student here. The idea was taken up by Dr Naser Sarmast and, today, we’re witnessing the orchestra’s success.” Unfortunately, due to family problems, the girl had to return to her home province, and then her family refused to let her return to Kabul.

Musicians in the orchestra range from 12 to 21 years of age. Recently, they had the opportunity to participate in various international programmes, such as the Davos forum in Switzerland. “One of our main successes so far was being able to show to the world a positive image of Afghanistan and its culture. This orchestra has been supported by several countries and is also known as the ‘Angels of Music’,” Sharkhush adds.

Every year, between 300 and 400 applicants take the institute’s entrance exam and only 50 of them are offered places. About 50 per cent of the candidates are homeless or orphaned children and are put forward by NGOs working on children’s rights in Afghanistan. As well as the Zohra Orchestra, the institute has 11 other music groups.

Sharkhush continues: “When a change occurs in a country, it’s better not to worry: you should be positive, and I am optimistic. Afghanistan is a country where art occupies a prominent place in people’s lives.”

At the institute, both rich students and orphans attend music classes under the same roof. They express their emotions – whether that means pain, hope, joy or grief – through music, so that one day they will be able to fulfil their childhood dreams. Sarmas ANIM “is like an island of hope in the dark. This institute is the symbol of the Afghanistan of tomorrow.”