Adopting one for the road 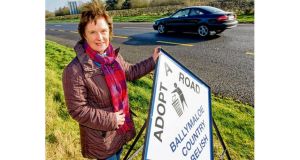 Yasmin Hyde on a stretch of the N25 in Co Cork that her company, Ballymaloe Country Relish, has adopted. Photograph: Michael Mac Sweeney/Provision

A scheme that keeps roads tidy, at no cost to the tax-payer, is making waves in Cork and Cavan Adopting one for the road

Do you get annoyed by the amount of litter strewn along the approach roads to towns and villages in Ireland? Do you find yourself hoping tourists look the other way if a scenic spot is blighted by rubbish accumulating nearby? If so, you may be interested in an innovative recession-proof initiative to keep these areas cleaner.

The Adopt a Road scheme (see panel) has been gaining momentum here since it was first adopted by Cavan Co Council in 2004. Michael Mussi from the Waste Management Section of Cavan Co Council first noticed the signs on highways in New York and made some inquiries. “When I came back, I adjusted what I could find to suit Ireland and was given the go ahead by Cavan Co Council,” he says.

Since then, about 50 businesses and voluntary groups have become involved with the Adopt a Road scheme in Cavan. “It tends to be the roads coming in and out of the towns and villages that are adopted and each sign stops at the reduced-speed-limit signs into the towns and villages,” says Mussi.

He estimates that the entirely voluntary effort has meant that almost 1,000km of road verges have been looked after that the council wouldn’t have had the resources to clean. “Some groups just pick up windblown paper and fast-food wrappings while others will also deal with scrap metal, like the odd shopping trolley or bike and even dead animals. We send out litter wardens the day after the clean-up to collect the rubbish bags.”

Yasmin Hyde, the owner of Ballymaloe Country Relish company, was so appalled at the rubbish building up on the N25 Cork to Cobh road that she decided to take action. “It’s a lovely road through the estuary of Cork Harbour, which was built about 10 years ago. I noticed the rubbish slowly beginning to gather close to where I work and I was ashamed when I had visitors over from the UK. I was also aware of the tourists – from the cruise liners which come into Cobh – taking day trips along this road,” she says.

Hyde approached the county manager about the issue. “He sent litter wardens out once or twice a year but the rubbish still built up,” she says. So, instead, she decided to take out radio advertisements that publicised the litter problem. “We said something like, if you want to see litter, come to Ireland and take the N25. The county council picked up the litter following the ads but it deteriorated again.”

So, she decided to pay contractors to pick up the litter on a regular basis. “We have since put up nice attractive signs with Ballymaloe Country Relish Adopt a Road scheme.” Hyde says that there are many other roads around Cork that businesses could adopt. “Many roads – some of them on the tourist routes – could do with monthly clean-ups,” she says.

Cork Environmental Forum (CEF), a voluntary group, has also been involved in the Adopt a Road scheme. “So far, in Cork, it’s just in the county area. We’d like to see the city included. In recessionary times, there is less public money available and things have to be done in an integrated fashion. There are other local groups like the tidy towns which could be involved and we’d also like to see the scheme expanded to include hedgerow management,” says Bernie Connolly from the CEF.

Meanwhile in Ennis, Co Clare, Gerry Murphy, an environmental patrol warden, is setting up the scheme with businesses and voluntary groups in the town. “Some businesses are interested in keeping the lanes off the shopping streets clean while others are interested in the approach roads to the town where there is the greatest need,” says Murphy. “The important thing will be to make sure the work is done on an ongoing basis and we’ll put up the signs to acknowledge the work is done.”

Irish Business Against Litter (IBAL) has suggested that the Government introduce a national Adopt a Road scheme. According to Dr Tom Cavanagh, chairman of IBAL, it’s the approach roads to towns and routes outside of towns that are most likely to be littered now.

“It would take a lot of work to negotiate deals with businesses, get planning permission for signs and employ contractors to keep the roads litter free. On a national level, this scheme would mean the country could be cleaner at no extra cost to the taxpayer or State.”

A road map to a cleaner environment

The Adopt a Road scheme involves businesses or voluntary groups “adopting” a stretch of road, street, lane or alleyway. Once the length of road is agreed (usually about one kilometre per group), the group works out a schedule to pick up litter and other debris at designated times throughout the year.

The local authority in charge usually issues safety guidelines (but not insurance), provides the groups with litter pickers and high-visibility vests, and agrees to collect bags of rubbish once the clean-up operations are completed.

Some businesses or organisations provide volunteers to do the clean-up while others pay professional contractors to do the work. Signs with the business name and logo and the Adopt a Road slogan are put in place along the route.

The scheme originated in the US in the 1980s and has since spread to Canada, New Zealand, Australia, Japan and now Ireland.

In the US, the Adopt a Highway (also known as Sponsor a Highway) scheme originated in Texas, when an engineer sought the help of local groups to sponsor the cleaning of sections of the highway. It quickly expanded to other states and is now in at least 49 states.

In New York City, for instance, the Adopt a Highway programme gives businesses the opportunity to adopt a mile-long stretch for a year at a time, the revenue from which is used to remove rubbish and clean the roads.

While generally popular, the scheme is not without controversy. One high-profile case involved the Ku Klux Klan (KKK) adopting a portion of the Interstate 55 just south of St Louis in Missouri. After the signs were repeatedly destroyed and the KKK sponsorship was dropped, the Missouri Department of Transportation adopted specific criteria to prohibit hate groups from future participation.

The section of the highway was later renamed the Rosa Parks Freeway in memory of the civil-rights heroine.