A wrongful hanging in Connemara, 1882 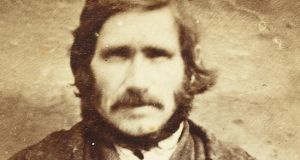 Myles Joyce, who was hanged in Galway in 1882 and is widely accepted as being innocent of the Maamtrasna murders. Photograph courtesy of the National Library of Ireland 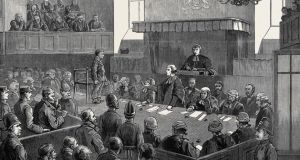 The Maamtrasna murder trial in a Galway court, as portrayed in a December 1882 edition of the Graphic, an illustrated British weekly. Image: Universal History Archive/UIG via Getty Images 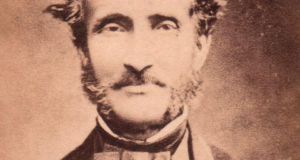 William Marwood, who was the hangman for three men condemned to death for the Maamtrasna murders 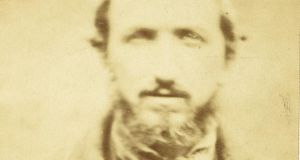 Tom Casey, the informer whose evidence helped to convict eight men but who later recanted and confirmed that his sworn testimony was perjured. Photograph courtesy of the National Library of Ireland

The handwriting was impeccable but written in a language the correspondent did not speak.

“Sir, I beg to state through the columns of your influential journal that my husband, Myles Joyce, now a convict in Galway jail, is not guilty of the crime,” a heavily pregnant Brighid Joyce said in her appeal to the editor of the Freeman’s Journal on December 11th, 1882.

“Does not everyone easily imagine a man going before his Almighty God will tell the thruth [sic], in telling the thruth they must confess that he never shared in it,” she continued.

“I earnestly beg and implore his Excellency the Lord Lieutenant to examine and consider this hard case of an innocent man, which leaves a widow and five orphans to be before long a dhrift [sic] in the world,”she concluded, signing off as “the wife of Myles Joyce that is to be executed on the 15th inst . . .”

A response to prison governor George Mason from the viceroy, Lord Spencer, coldly stated that the “Law must take its course”. Five days later, even as Brighid had given birth to a daughter, The Irish Times was at the Galway scaffold.

“At a quarter-past eight o’clock the prison doors were thrown open,” the paper’s correspondent noted in his report published on December 16th, 1882.

“With startled looks they marked the wild, hollow eyes, sunken cheeks, and shrunken forms of each other, but not a word passed between them. Myles Joyce came first, between two warders, bareheaded, repeating in Irish the responses to the prayers which were being read by the Rev Mr Grevan.

“Then came Pat Casey, pinioned, silent, and with a look of great agony on his features. Last appeared Pat Joyce, taller than the others, wearing his hat, silent, too, and walking with firm and steady step . . . ”

The executioner, William Marwood, then placed them with the tallest man in the centre, and began pinioning the knees. Myles Joyce continued to speak in an “excited way”, the correspondent said.

“It was impossible to gather the meaning of much that fell from him, even by Irish-speaking persons who were present; but the following sentences have been interpreted for me by one who understands and speaks the language thoroughly, and who was close enough to hear the greater part of what he said.

“These sentences were: ‘I am going before my God. I was not there at all. I had no hand or part in it. I am as innocent as a child in the cradle. It is a poor thing to take this life away on a stage; but I have my priest with me.’ ”

Worse was to come.

“Two of the ropes remained perfectly motionless, but the third, that by which Myles Joyce was hanged, could be seen by those who watched it closely to vibrate, and swing slightly backwards and forwards,” the report stated.

“It soon became evident, from Marwood’s behaviour, that there had been a hitch of some kind or other, and he muttered, ‘bother the fellow’, sat down on the scaffold, laid hold of the rope, and moved it backwards and forwards . . . ”

It may have been 134 years ago, but on the Galway-Mayo border they still remember the horrific deaths and ensuing miscarriage of justice associated with Connemara’s Maamtrasna murders.

When John Joyce; his wife (also called Brighid); his mother, Mairéad; his daughter Peigí; and son Micheál were killed in Maamtrasna valley, it was presumed that the motive was connected with stealing sheep. The offence was regarded as serious at a time of severe poverty and hardship in the west.

Only two of the family survived the attack: a nine-year-old boy, Patsy, who was badly injured, and his older brother Mairtín, who had been working as a farmhand in a neighbouring parish and was away from home that night. Eight men were convicted on the basis of what emerged later to be perjured evidence. Three of the eight were executed and five imprisoned.

A kind of confession

Two years afterwards, in August 1884, Tom Casey, who was one of the witnesses, walked up to the altar of the church in Tourmakeady during Confirmation Mass by the archbishop of Tuam, Dr John McEvilly. Holding a lit candle, Casey declared he had caused the death of an innocent man, Myles Joyce, and the imprisonment of four others who were not guilty. There were subsequently lengthy debates in the British parliament, with Charles Stewart Parnell and colleagues demanding an inquiry. There has never been an official apology.

The Maamtrasna saga is a mix of “murder mystery, courtroom drama and political intrigue”, says journalist Seán Ó Cuirreáin, who has uncovered previously unreported detail for his new book, Éagóir. For instance, Ó Cuirreáin has come across a letter from the sheriff’s office in Galway asking the hangman, William Marwood, from Lincolnshire, if he would do a cut-price job as the executions would all take place on one day. “I have to remark that the law does not allow the Sheriff anything for these executions and that he has to pay the entire cost out of his pocket,” the officer wrote to Marwood, offering him £20.

While perusing the British archives in Kew, Ó Cuirreáin also discovered that a move to pay the witnesses bore the personal hand of lord-lieutenant the Earl Spencer, great granduncle of the current princes Harry and William. Not only did he compensate three men who claimed to be eye witnesses, but he paid them well over the going rate: a sum totalling £1,250, equivalent to about €157,000 today.

Ó Cuirreáin’s account notes that the accused men’s solicitor was a 24-year-old Trinity College graduate who didn’t have a word of Irish. The men themselves had no idea what was going on in court due to the language barrier. The court records one of them, bewildered, asking “Cén lá a chrocfar mé?” (“What day will I be hanged?”).

The five who received a reprieve languished in prison in spite of the fact that the man who had planned and directed the murders was named publicly in print and in parliament. Ó Cuirreáin publishes some of the letters dictated by the five to their spouses at home.

“I am in very good health, thank God. I have every convenience,”one of the men, John Casey, wrote, clearly trying to remain positive. “It is very hard for me to have been in prison and separated from my family, especially when I am innocent,” he said. “Let me know are the crops promising this year . . .” The first to champion their case was a journalist and MP, Tim Harrington, who met some of them when he was convicted for participating in anti-eviction protests.

“Harrington did all the good things an investigative journalist would do, visiting the area with two priests in 1885,” Ó Cuirreáin says. “He even named the instigator, who was never charged, because even back then the British government couldn’t contemplate the ‘appalling vista’ of having to admit to convicting innocent people.”

As for the two children who survived, they were sent to Artane industrial school in Dublin. One of them, Mairtín, spent time in Britain and the US before returning to Dublin. Two of Mairtín Joyce’s sons were members of the senior Dublin GAA team playing in Croke Park on Bloody Sunday in 1920, when British forces opened fire on the crowd and killed 14 civilians.

Ó Cuirreáin says he was attracted to the case for a number of reasons, not least the fact that it was a “language issue”: the men who had no English were tried and convicted in an English-speaking court. Although there have been other accounts, Éagóir is the first book published in Irish, and he undertook this “as a mark of respect to the men and their families”.

Five years ago, two members of the House of Lords, David Alton and the late Eric Lubbock, sought to have the case reviewed. Britain’s justice minister, Crispin Blunt, conceded that Myles Joyce was “probably an innocent man” but said he would not seek a posthumous pardon unless there were “compelling new reasons or sufficient public interest”.

Lord Alton has close family ties with the Maamtrasna area. He says the case opened prime minister William Gladstone’s eyes to the “injustices in Ireland and paved the way for his support for land reform, for Irish home rule and for his ‘mission to pacify Ireland’.”

Pointing to the parallels with the Birmingham Six and Guildford Four, Lord Alton has said that “the true healing of British-Irish relations requires that, wherever possible, ghosts should be laid peacefully to rest and wrongs righted. If we forget the lessons of history, or try to erase those experiences from our identity, we will be condemned to make the same errors all over again.”