A Walk for the Weekend: Walk tall to see Kerry in all its glory 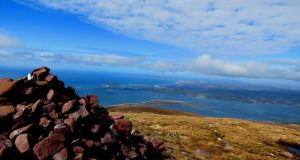 Walkers will be rewarded with spectacular views of Tralee bay

The Sliabh Mish Mountains have a series of long, deep valleys stretching northwards from their central spine. They provide superb walking, and if the mood takes you, an ascent of their head-walls allows you to return via one of their ridges.

The only one I hadn’t walked is the valley of the Curraheen river which flows into the upper reaches of Tralee bay. A study of the OS map suggested that the valley floor in this instance might not be particularly easy going, so I opted instead to walk around a circuit of the tops which encircle the valley.

The track from the car park leads on to a signpost on the Dingle Way. Of the two spurs which mark the mouth of the glen, the one to the east is bare moorland while the one to the west is clothed in leggy heather and has a steeper slope, which promised a tedious descent.

Deciding that it was better to ascend in hope than descend in irritation, I headed west along the Dingle Way to the footbridge which spans the Curraheen and then turned south across the bog to the base of the spur. In places the heather was almost knee high, but it was easy to see the ground underneath and avoid slippery rock and small bog holes.

Once clear of this terrain, it was a straightforward pull up to the first peak, Spot Height, 603m, a good spot to survey the glorious scene to the north, with the gleaming sands of Banna Beach stretching the 10km from Fenit to Ballyheige. Below me sprawled the town of Tralee, with the gleaming white windmill at Blennerville adding an exotic touch to the prospect.

The ridge narrows for a steady haul, first up to Spot Height, 819m and then on to the summit of Barr Tri gCom (The Top of Three Cooms), 851m. It gets its name from the three great hollows gouged out of the mountain by glacial action.

The mountain is littered with blocks of purple conglomerate, which is a mix of pebbles of different rock types cemented together whose origins stretch back eons to when this area was a hot desert at the center of the super continent of Pangaea.

To the south, the mountains and beaches were etched darkly against the blue hues of sea and sky. The view from the summit plateau also allowed me to look down the length of the Curraheen Valley and mighty impressive it is too, and worthy of exploration on another day.

The return along the eastern ridge is on easy ground and even though there are five peaks on it there is not a great dip between any of them. I made good progress to the last one, Knockauncurragh, 567m, from where the ascent down the spur which led back to the track was an easy trek. I was pleased that I had made the right choice of route.

How to get there: Take the N86, Tralee to Dingle road. Three kilometers beyond Blennerville there is a turn on to a third class road. The church is a short distance in from the main road

Food and accommodation: Blennerville and Tralee. There is a good pub/restaurant a kilometre west of the turn off.

Róisín Ingle: Even Matt Damon has fecked off back home
6

We must consider the negative health consequences of the lockdown
9

FaceTiming Pamela Anderson: Nothing can prepare you for this
Real news has value SUBSCRIBE