A national ID card by any other name?

Opinion: The card will contain my name, date of birth, PPS number, photo, an electronic signature, but it will also be technically possible to add biometric information such as fingerprints and eye scans. Should I be worried? 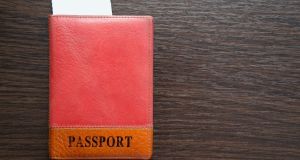 In the Intreo office the officer reckoned they aim to ultimately include everyone in the State, and agreed it is an ID card in all but name.

Are we getting identity cards by the back door, and with barely a whimper about it?

I didn’t even give it a second thought. I got all my bits together yesterday like a diligent citizen and went to the local Intreo office. There in a nook at the back a man has been beavering away for over two years verifying ID and processing citizens for the new SAFE (Standard Authentication Framework Environment) public services card. He told me he alone has registered some 6,000 people. And that’s just in one small Intreo office.

A single page document had arrived in the post “inviting” me to register for my card. The public services card (PSC) will, the Department of Social Protection says, “act as a key for access to public services in general, identifying and authenticating individuals as appropriate and where required”, will make things more efficient and minimise fraud and error.

The document had assigned me an appointment, saying to ring if I needed to change it. (No one answered, several times, and there’s no voicemail or email contact; the phone was eventually answered, days later.) It suggested bringing a choice of ID - passport, long form birth cert, driving licence - the usual - and a utility bill with address. The card will contain my name, date of birth, PPS number, photo, an electronic signature, but it will also be technically possible to add biometric information such as fingerprints and eye scans.

It’s an efficient process. It took about seven or eight minutes in total, including taking my photograph and my mother’s maiden name (I thought afterwards they probably electronically encode that into the card), and a brief chat, as opposed to the 45 minutes to register that the invitation suggested (What were they planning to do when they wrote that? Tattoo people?)

It’s also an expensive process - with multiples of my man in the nook burrowing away for years recording individuals’ personal information. The total capital cost of the programme is estimated at €24m excluding VAT, and the cost up to the end of September 2015 was €17.47m.

The PSC is designed to replace other cards in the public sector, including the free travel pass and the social services card and to make it easy to check clients’ identity. It is being issued to those claiming social welfare payments, in phases, and because that includes people getting child benefit, it represents a huge proportion of the population so far. (I was hauled in the dragnet operation for child benefit recipients.)

In the Intreo office the officer reckoned they aim to ultimately include everyone in the State, and agreed it is an ID card in all but name.

On enquiry, the Department of Social Protection said this week: “All new applicants for a PPS Number as well as all new and existing social welfare claimants are statutorily obliged to satisfy the Department as to their identity. In practical terms, this entails going through the SAFE registration process.” So, if all new PPS applicants have to get a PSC, ultimately everyone will have one, and only a tiny number could slip under the radar.

How did that happen, while no one was paying attention?

The scheme for a new public services card was launched in February 2011 by former Minister for Social Protection Éamon Ó Cuív. At the time the Irish Council for Civil Liberties called it “a costly political stunt”. Civil rights lobby group Privacy International said that once a national ID card is introduced, citizens’ rights will be steadily eroded. “In Greece and Argentina, for example, being caught cardless could land you at the local police station, where your identity will be established using other means, such as fingerprinting,” the group warned. Tanya Ward, an ICCL director, pointed out at the time: “Nobody is going to raise an issue about a bus pass. And when it eventually doubles as your medical card, or as garda proof of age ID, it will seem very convenient. But the more information linked to the card, the more possibility there is for function creep - when data collected for one reason is used for another - or for information to be shared between agencies, however trustworthy they may be.”

But the furore faded and the project seemed to quietly progress while we were’t looking.

The department, in answer to my question this week, said that 1.64 million PSCs have been issued to date, with a goal of three million PSCs by the end of 2016.

Is everybody going to have them eventually? Will they be obligatory to carry? When will we be required to show them? Curiously, I couldn’t find this out easily online, but the department said: “There is no generic mandatory requirement for a citizen to carry a PSC or to produce one on demand. However, the State has elected that certain publicly provided services may only be made available to people in possession of a PSC. This improves the efficiency of the delivery of these services, makes them easier to access, significantly reduces the incidence of fraud and error and considerably reduces the potential for forgery.” It says “Demand for the PSC will [then] be driven by other public services as SAFE registration becomes a requirement to avail of certain public services.”

Aside from comment at the time, there’s been relatively little public debate about privacy issues. Perhaps it’s because we’ve been occupied with economic collapse and the ensuing unjust debt and deprivation.

It was only after I left the Intreo office, having registered for the card, that I thought about it properly. In Ireland we’ve always been opposed to the notion of a national identity card. It may partially be Irish cuteness that avoids telling anyone the whole story. But it’s also a visceral suspicion of how social control led to unspeakable things on mainland Europe, where mandatory ID is common, with, still, the whiff of police state (France), or the barely-below-the-surface fascist history (Italy, Spain, a lot of eastern Europe, and Germany of course).

In the UK, it’s a different story. A similar proposal for national identity cards was withdrawn (at about the same time as ours were introduced), after what I recall as a healthy debate between Labour, in power and proposing the card, and the Tories and Lib Dems objecting. Here, the main political parties went along with it, and O Cuiv’s proposal is now being implemented by FG/Labour. Is it the blueshirt history that makes it a no-brainer?

And the rest of us, we seem to have abandoned that misgiving about control, and fear of lack of privacy. Too many other things to worry about?

I think I regret my unquestioning compliance. I await the arrival of my card in a week.