A displaced world: one in every 122 people can’t go home

Dubliner Gráinne O’Hara, who has worked for the UN Refugee Agency for more than 20 years, says displaced people flee to Europe only as a last resort 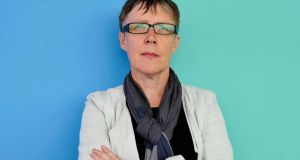 Gráinne O’Hara: ‘The type of work I do is very, very compelling.’ Photograph: Aidan Crawley 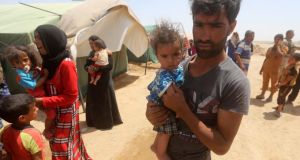 People who fled their homes two months ago after Islamic State seized Ramadi, the capital of the Anbar province in western Iraq. Photograph: Ahmad al-Rubaye/AFP/Getty Images

The decision to seek asylum in a foreign country is almost always a last resort. Most people are keen to stay as close to home as possible, remain with their family and hold on to their property, says Gráinne O’Hara.

“It’s not a decision that people take very lightly. To read some of the current media coverage you would think that people just upped one morning and said, ‘You know what, I think I’ll just head now to Europe.’ That’s not the dynamic at all.”

O’Hara is deputy director of the UN Refugee Agency (UNHCR) in Baghdad, Iraq. Two months ago she watched as 200,000 people fled their homes after Islamic State seized Ramadi, the capital of the Anbar province in western Iraq. She says 60 per cent of those who fled have chosen to remain inside that vast province.

“It gives you an indication of how people, when they’re displaced, how they process things. They’re still trying to stay as close as possible to home. There’s still a degree of optimism that they might be able to return home soon.”

O’Hara has witnessed first-hand the human ability to cling on to the final strands of optimism, even in the face of deep injustice and violence, since she first began working with the United Nations more than two decades ago. The Dubliner moved to Mexico city in 1994 as a young lawyer with the UN volunteer programme to work with refugees passing through Mexico en route to the United States. Two years later she began working with Guatemalans being repatriated after more than three decades of civil war.

Before leaving Ireland, O’Hara worked as a lawyer with the Free Legal Advice Centre but her interests lay farther afield.

“It all seems so naive and a bit self-interested because I had the idea that it would be great to get a job for the UN where I’d get to travel and they pay you for it.” After applying for the volunteer programme, she was sent to Central America because she was a lawyer who spoke Spanish.

“It was not that I had any great experience in refugee work, far from it. Everything I know, I learned it on the job.”

Over the next 20 years she worked with refugees around the world, from the Republic of Macedonia, Kosovo, Burundi, Darfur, Syria and Afghanistan.

Nations on the move

In June 2015, UNHCR reported the number of people forcibly displaced from their homes at the end of 2014 had risen to 59.9 million, up from 37.5 million only a decade ago. This means one in every 122 humans is now a refugee, internally displaced or seeking asylum. If this were the population of a country, it would be the world’s 24th biggest.

A refugee is defined as someone who has left his or her country through fear of persecution; an asylum seeker is someone seeking refugee status outside his or her home; while an internally displaced person has been forced from home but remains within the borders of his or her country.

Since January 2014, 2.9 million Iraqis have fled their homes, while more than 2.3 million people are living inside Islamic State-controlled areas, without access to basic humanitarian support.

The conflict in Iraq has become increasingly characterised by mass executions, torture, rape and horrendous acts of violence. Meanwhile, some 250,000 Syrian refugees have arrived in the Kurdish region of Iraq, fleeing the civil war in their home country, which has now entered its fifth year.

O’Hara says the scale of the international refugee crisis has “augmented immensely” in recent years, bringing with it problems of food security, health, sanitation, education and basic protection.

Choosing to leave your home in search of a better life is “a very complex, challenging and emotionally distressing experience for anyone who becomes displaced, whether that’s internal displacement or crossing a border to become a refugee”, she says.

When people hear the word “displacement”, they often conjure up images of refugee camps, says O’Hara. However, in Iraq the vast majority of displaced people live in host family set-ups.

“If you put yourself in the shoes of these people, it’s one thing to have the relatives come visit for a week. It’s quite another to have extended family members living with you for six months, for a year. This is the situation that many Iraqi families are facing. They’ve taken in full extended families, so you’re talking 30-50 people living in the family compound.”

O’Hara hopes UNHCR’s emergency Iraq appeal will help to raise the profile of the increasing cost of livelihood for people displaced within their own countries.

The interruption of the education of more than three million Iraqi and Syrian children is cause for great concern, she says. Countless Iraqi schools have been damaged, destroyed and are occupied by armed groups.

Meanwhile, women and girls face increased risks to their health and safety when forced from their homes.

“Perhaps some of the men are fighting, or perhaps a number of the males in the family have been killed, so you have a higher concentration of female-headed households on the move in situations which expose them to acute vulnerability and heightened risk of sexual assault.”

When desperation sets in and people begin to lose hope, only then do they consider travelling to the Mediterranean and boarding a rickety boat headed for Europe.

In June UNHCR reported that an average of 1,000 refugees are arriving on Greek islands every day. Since the beginning of the year, 77,100 people have arrived in Greece by sea. Almost 60 per cent of arrivals are from Syria, with others from Iraq, Afghanistan, Eritrea and Somalia.

UN high commissioner for refugees António Guterres said in June that “world stability is falling apart, leaving a wake of displacement on an unprecedented scale”. He said the world’s global powers had become either “passive observers or distant players in the conflicts driving so many innocent civilians from their homes”.

O’Hara says Europe must respond to the crisis on the basis of collective solidarity. “Just because you happen to be Malta or Italy, it cannot be their sole responsibility. It’s a shared challenge that the European states must meet collectively.”

She won’t be coming home any time soon, much to the disappointment of her mother.

“The type of work I do with the UNHCR is very, very compelling. In a way, there’s a certain addictiveness to it.” It’s not just working in areas of conflict that she enjoys: she also spent a few years working in New York and Geneva.

“When I first joined UNHCR as a fresh, young law graduate, I had the idea that I’d do this maybe for five years or so. Then you think, I’ll go home; I’ll settle down. And now it’s 21 years.

“It’s very satisfying, the sense of being engaged with people and being able to help, even in the midst of the most appalling crisis. It’s very rewarding.”

Face masks: The definitive guide to when to wear them, how to wash them, and the chin tuck
8