Partners in life: ‘We have a common bond’

Four years ago Gerry Niland feared that his feisty, sociable wife, Jennifer Butler, would die from her heart condition. But they and their sons have weathered the storm 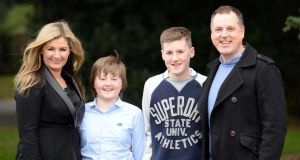 Next generation: Jennifer Butler and Gerry Niland see themselves as the bridge between their own backgrounds and the futures of their sons, nine-year-old Robert and 13-year-old Daniel. Photograph: Eric Luke

“Four years ago I thought I had lost her,” says Gerry Niland, who saw his feisty, sociable and ambitious wife, Jennifer Butler, “fading into the distance”.

The 42-year-old’s almost fatal heart condition came with the onset of the recession, which nearly destroyed the couple’s businesses.

Four years later Butler is glowing with health, and her award-winning beauty salon – the Vanity Rooms in Stepaside, Co Dublin – is thriving. Wolstan Investments, the business owned by her 49-year-old husband, is helping clients to negotiate the minefield that ensued from the financial crisis.

And their marriage is better than before, they say – after circumstances that would have broken many a relationship.

The couple “share 50/50” the responsibilities of rearing two sons. Niland does the laundry and ironing; Butler keeps the fridge full with family dinners. Three nights a week the couple have dinner alone together at home. They talk, argue and tell each other everything. “Three big rows a year,” says Niland.

In 2007-8, after being in management at Aviva, Niland took voluntary redundancy to go out on his own as a financial adviser. Butler had decided to use her degree in business, computers and banking to pursue her true love and open the beauty salon.

Yet, out on his own, Niland missed the coffee breaks and camaraderie of his colleagues; he found home-based work isolating. Rather than rely solely on his wife for emotional support, Niland he reached out to his local Lions Club and rugby and golf clubs. This gave him one of the social networks that, he says, men need to nurture.

Without the support of their parents, Niland and Butler say, they wouldn’t be where they are today. The support of wider family and friends – who introduced the couple 20 years ago – has given them a sense of stability, community and encouragement.

When the financial system crashed in late 2008 “it was like going off a cliff”, says Niland.

In the beauty business women stopped having their nails done and gave up their fake-tan sessions. “It was a question of, Who do you pay first?” says Butler. “The six staff, the Revenue, the rent, the rates? I felt everyone pulling out of me.”

Fortunately, the couple were content with their three-bedroom semi-detached house in Celbridge, in Co Kildare; they downgraded their cars, stopped eating out, and agreed on financial priorities, such as their sons’ education.

They see themselves as the bridge between their own backgrounds and the futures of their sons, 13-year-old Daniel and nine-year-old Robert.

When they sum up their experience of weathering the financial- and health-crisis storms, the words they use are “acceptance” and “gratitude”. They have seen many friends lose marriages and homes, and Butler feels “lucky to be alive”. Niland says, “We are both very family oriented and have a common bond. It’s about mutual support.”