Just in case Kevin O’Hanrahan forgot who he was marrying, his nephew walked up the aisle ahead of Emma Hagan carrying a big sign

Kevin O’Hanrahan, who is completing his doctorate in clinical psychology in UCD, and Emma Hagan, a paediatric nurse in Our Lady’s Hospital, Crumlin, are both from Skerries, Co Dublin and started going out when they were students at Skerries Community College.

While Emma was travelling around India and Nepal in 2013 for three months, Kevin began planning the proposal, asking his grandfather and aunt for his grandmother’s ring. When Emma returned, he proposed on the on the couple’s balcony in Rathmines. 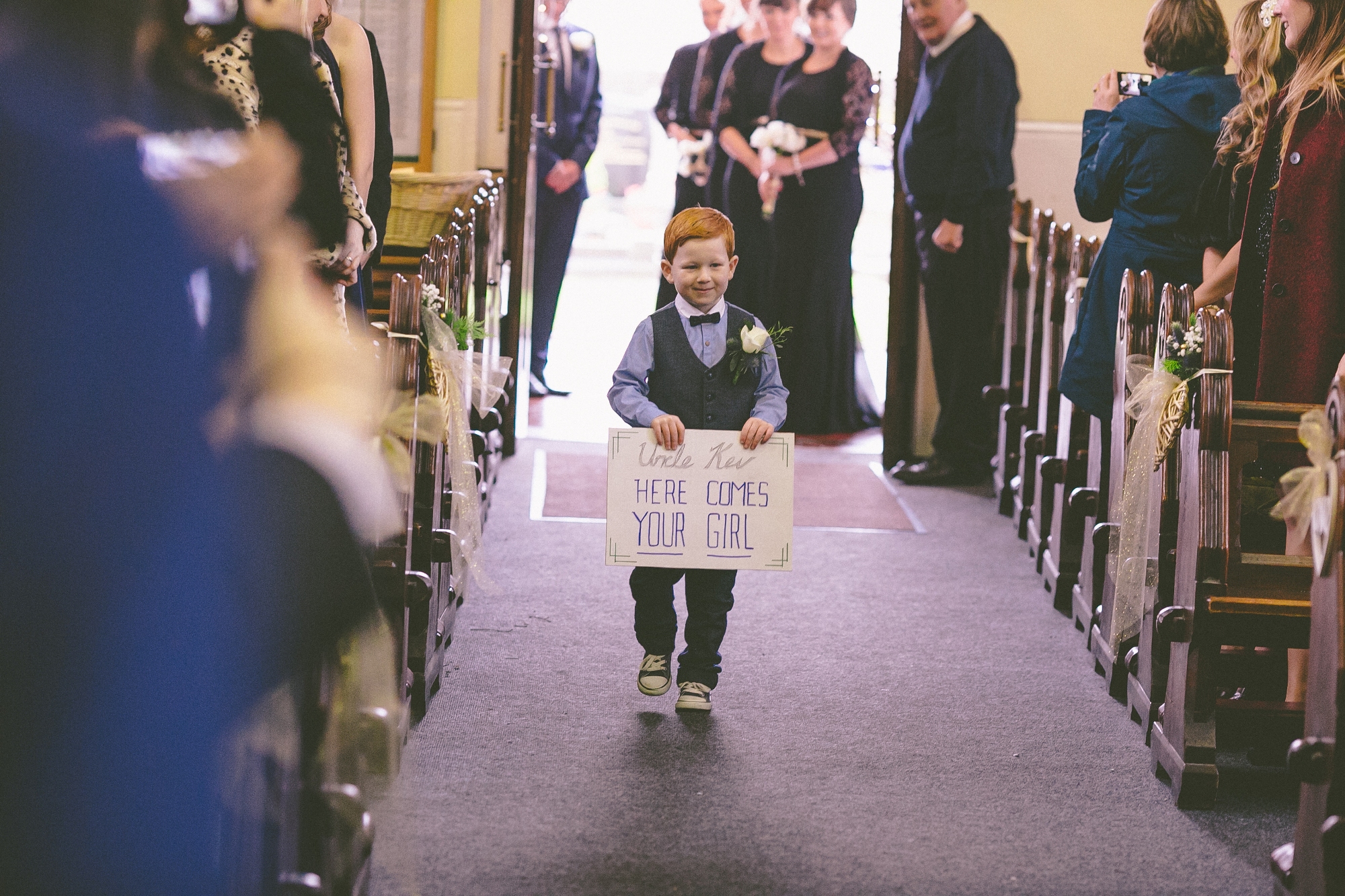 They were married on New Years’ day at Lusk church where the bride was given away by her parents Mary and Jim Hagan. The reception afterwards was held at Ballymagarvey Village.

Church music was a combination of professional singer Sarah Bass and friends and family members. The bride’s dress was from Drogheda-based designer Edel Tuite, her shoes were LK Bennett and she made her own headpiece and veil. Best man was the groom’s brother Rob O’Hanrahan and the groomsmen were David Weldon (who designed signs used on the day), Dave McGrath (wedding stationary designer), and Kevin McDonnell (who flew from Australia for the occasion).

Alice Sheridan, the bride’s sister, was Maid of Honour, and the bridesmaids were Katie McMenamin, Claire Hagan and the groom’s sister Emma O’Hanrahan, who also made the cake. Pageboy Jack Sheridan, Kevin’s nephew, walked up the aisle ahead of the bride with a sign saying “Uncle Kev, here comes your girl”.

Emma’s cousin Susan and Aunt Catherine did the brides’ and bridesmaids’ hair. Kevin’s grandfather Dick said Grace before the meal. His maternal grandparents Pat and Julie Cowman were also there.

The newlyweds' first dance was to Elbow's One Day Like This. Highlights of the day include "beautiful singing by our friends" and "great, funny, little-bit- sappy speeches".

“Some Jewish friends insisted that we do the Hora during the dancing which was great craic.” The couple spent five days in Budapest after the wedding.

Róisín Ingle: I’m not an office person. I know that now
Michael Harding: Flinging scurrilous lies across the county boundary is an ancient Irish pastime
‘We moved to Ireland because of the weather’: The Swedish couple who fell in love with west Cork
Bargain flights: The cheapest month to fly from Ireland isn’t far away. Read Conor Pope’s tips
Prince Harry ‘throws spanner in works’ with ‘attempt to rewrite memoirs’ in wake of Queen Elizabeth’s death

Big winners are those earning over €40,000
Budget 2023 calculator: How this year’s budget will affect your disposable income
Liz Truss learns the hard way that Britain is not the US
Budget 2023 main points: Details of the tax, rent, childcare and cost-of-living measures
Breast cancer diagnosis: ‘I asked if I should bring someone with me. They said yes – so I knew what was ahead’