Our wedding story: 'It would be great to have our marriage recognised in Ireland'

John Callaghan and Bobby Barber met and married in San Francisco, but hope to restate their vows in Ireland soon 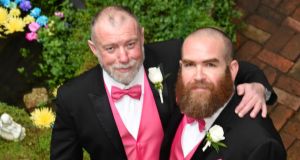 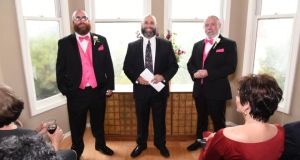 John Callaghan (50) and Bobby Barber (40) lived in San Francisco for 18 years before they met online just over two years ago.

John grew up in the Ballymun flats near Dublin and moved to the US 20 years ago. Until his recent retirement, he worked in financial services. Bobby, from Las Vegas, is an entertainment events and theatrical producer.

They proposed to each other and were married by a minister of the Universal Life Church on Christmas Eve 2014 – the anniversary of their first meeting – at a small ceremony before 25 friends and family at their home in the Castro area of San Francisco.

John’s mother Liz planned to travel for her son’s wedding but suffered a broken foot a couple of weeks before. However, she and other family members were linked in using a smartphone. “It wasn’t ideal,” says John, “but hey, they still cried their eyes out during the ceremony.” 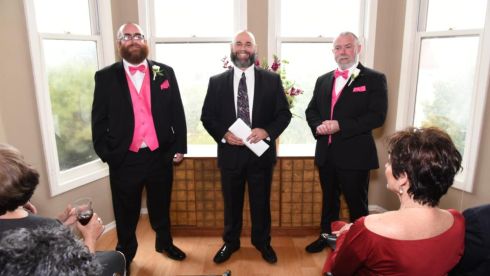 Everything was “very much a joint effort”. That included the suits and the pink theme. “That was a nod to queer history,” Bobby says. “Pink was a colour of mockery for gay people. Now we ‘own’ it.”

In place of a honeymoon, he adds, “we plan to visit Ireland during the summer and, assuming all goes well in the May referendum, we will restate our vows in front of John’s family. It would be great to have our marriage recognised in Ireland.”


We’d love to hear your wedding story. If you’d like to share it with our readers email weddings@irishtimes.com with a photograph and a little information about your big day