No breaking in to the ‘Dub’ club 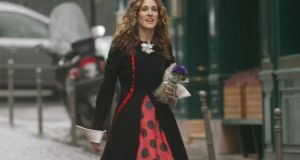 You can become a New Yorker, but never a Dub . . . Sarah Jessica Parker, as Carrie Bradshaw, in a scene from Sex and the City. Photograph: Craig Blankenhorn/AP Photo/HBO

How long does it take to become a New Yorker? About eight years, according to Carrie Bradshaw in the TV series Sex in the City. Having served her apprenticeship by vying to be seated in the latest top restaurants, swapping rack-rent stories, and seeking a mate in a town full of commitment-phobes, Carrie finally considers herself a New Yorker. Even though she’s from Connecticut.

Well, everyone who lives outside the Big Apple knows New Yorkers are full of themselves. And rude. Other American cities are far more big-hearted.

Chicago, the city where I was born, has an easier method for turning outsiders into insiders. It’s all to do with pronunciation. Once you learn to pronounce the names of the city (Chi-CAW-go, rather than Chi- CAH-go), the Great Lake (MISH-i-gan, rather than MICH-i-gan), and the state (Ill-in-OI, rather than Ill-in-OIS), you’re in.

As a result of this inclusiveness, most Irish people know New Yorkers and Chicagoans who hail from Sligo, Meath or Kerry.

Now consider this: if those same people from Sligo, Meath or Kerry had instead moved to their own capital city, how long would it take before they’d call themselves Dubs?

Em, this is a trick question, right?

All cities draw people from elsewhere. Dublin, as we all know, attracts such a high proportion of the nation’s population that one day this island will tilt to the east. Census figures show it grew from just over one million people in 1991 to 1.2 million in 2011.

This month alone, its universities have sucked in thousands of young people from other regions. But if any of these thousands are still in the city in eight years, or 80, how many will see themselves as Dubs?

Go on, now. You know the answer: none. And if they tried, they’d be slapped down by true Dubs whose own parents come from Laois rather than the Liberties.

A girl from Clonakilty who studies at UCD for four years, takes an advanced degree at Trinity, gets a job down the Docklands, buys a house and raises a family in Raheny, and is eventually buried in Fingal will never, at any stage of her Dublin-centred life, go native.

Far be it from me to suggest that any self-respecting girl from Clonakilty would want to be a Dub. It works both ways. But that’s exactly what makes the Dub/culchie thing so weird.

This is a time in human history when we’re less restricted by identity than ever before, at least in our part of the world. Two guys can get married and become parents. A woman can be turned into a soldier. A man can opt to lead the rest of his life as a woman.

You can change your religion, your nationality, your gender. But switch from culchie to Dub or vice versa? Nah. It’s either/or.

To Dubs, all Irish people born outside Dublin are culchies, whether they live in the countryside, town or city. Brendan Behan was reportedly so discriminating that he regarded anyone born beyond the Royal or Grand canals as rural. I once witnessed some Dubs out a wannabe who claimed to be one of them. He was in fact from the darkest region of, em, Skerries.

Rural dwellers are just as hardline, labelling any outsider a blow-in.

It’s not difficult to be a blow-in: anyone hailing from the far side of a hill or beyond a particular bend in the road will qualify. My family has lived in rural Louth since 2000, and my naive American husband once asked when would we no longer be blow-ins. About five generations should do it.

We do have our in-betweeners: kids born in, say, Sydney, whose Irish parents later move back to Ireland, or foreigners who take out Irish citizenship. In time, their own children will find their slot; after all, lots of true Dubs have been such for only one generation.

But once a culchie, always a culchie. Once a blow-in, always a blow- in. Once a Dub, always a Dub. It’s not carried in the blood – a Dub can have culchie parents and vice-versa – but it is fixed at birth.

Strange that we are so rigid on this one point. After all, we embrace globalisation. The Central Statistic Office says that in the year to April, 46,500 Irish people emigrated and 52,700 migrants moved here.

Irish people can be flexible culturally when it suits us. I know plenty who resented the Irish language during their schooldays, but embrace it enthusiastically when abroad in order to discuss foreigners without being understood. We elected a president who was born in Northern Ireland. And we’d name Lionel Messi Irishman of the Century, provided he signed up for the national team.

Even so, us parents who live beyond the Pale are in no doubt. As we wave off our youngsters en route to UCD or DCU or Trinity or DIT, we tell them: work hard, and you can become anything.

Has fairytale Kerry castle found a buyer at last?
6

2:10 'This is our counselling sessions': How football is helping men heal