My husband doesn’t find me sexy. Should I end the marriage? 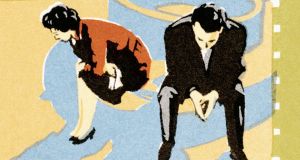 Q I look after myself and never expe cted at my age (late 40s) to be “on the shelf”, emotionally speaking. I’m married but my husband is really just a housemate. He has his space with the door closed, and when I enter he guards his laptop and phone. It doesn’t take much to trigger an argument, although we still get on well other times and can share a laugh and enjoy being a family with our four children.

It has been years since we were intimate, even though I have tried to keep him interested, but after a quick cuddle he would roll over defensively and not be turned on. We enjoyed an active sex life in our 20s and 30s and I miss it.

I used to blame the mutual exhaustion of parenting, but after being rejected again and again, I have stopped trying, and accept that he no longer regards me sexually. I know that porn arouses him. He has even posted pictures of women he fancies on Facebook. I have pe eked at his phone messages, there are women friends texting, so I asked him straight out if he was having an affair. He denied it, but does it really matter? He has made me feel so bad I can’t imagine having sex again. Is this it for the rest of my life? Or should I end the marriage?

A You’re feeling unattractive and rejected and you don’t deserve to be. You are at a vulnerable time as you approach 50 , with every intention of remaining an alive, energetic, sexual woman. Your husband seeing you as a “roommate”, as you describe it, isn’t the way you want to live the rest of your life.

I understand your fear that your husband is having an affair, but I wonder whether this is a diversion. After all, your husband being unfaithful could bring a clear-cut answer to your problems. You could blame him and lick your wounds with an excuse to end the marriage. Safe on your high horse, you wouldn’t have to take the risk of opening your heart and telling him about how hurt and sad you feel. This is incredibly scary for most people.

Anyone who has kids sees their sexual relationship affected, but since you had three more kids after your first, it wasn’t affected that much. You were both active and presumably enjoyed yourself, so maybe this is an excuse too for not facing the elephant in the room.

So what is the elephant in the room, really? There could be a simple explanation. Teresa Bergin, a psychotherapist specialising in sexuality, suggests that your husband is likely to be experiencing erectile difficulties. “Many men with erectile dysfunction will say that their libido is also affected – we’re not naturally inclined to approach situations that provoke anxiety and end in disappointment and therefore avoidance seems to be the only option,” she says.

Perhaps he is not avoiding you, he is avoiding being asked to perform.

It’s crucial that the two of you start a conversation about what’s happening before it goes too far. A good first step would be for your husband to see the GP for a check-up to ensure that there are no physiological issues. Sex therapy would help you get things back on track. You have a lengthy marriage and four children – seek help before making any drastic decisions about ending the marriage.

Email your questions to tellmeaboutit@irishtimes.com or contact Kate on Twitter, @kateholmquist. We regret that personal correspondence cannot be entered into

TikTok boom: The app exploding in popularity among Irish teenagers
7

I'm up for sex the whole time, but my husband sees it as not putting in any effort
9