What to be aware of when choosing your first car 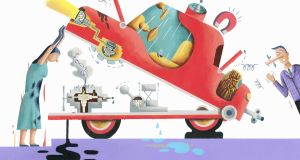 Insurance is really the deciding factor when it comes to any first car choice. If you’re under 30, you’re going to get hammered for that first-year premium. Photograph: Getty Images/Ikon Images

“Your first car is the aperitif to your driving life. But it is also the deposit on your next car, so it is important to buy with your head and not all of your heart,” Tony Toner, driving trainer at the Institute of Advanced Motoring of Ireland, told The Irish Times.

“This can be a hugely emotional time, with the excitement and independency of that first car. Of course, the risk is that a bad buy will eat up all your finances, thereby denying you the freedom you are dearly paying for. Motoring will take as much money as we can throw at it.”

Toner says that, often, the old reliable choices are the best ones. VW Polo, Ford Fiesta, Opel Corsa, Renault Clio. There is, though, one choice of first car, not an obvious one, that could actually work surprisingly well, according to Toner. “What about a Nissan Leaf? They have tiny running costs, affordable insurance, they’re becoming cheaper and cheaper second hand.”

The choice of a Leaf might be slightly restrictive, given that they only come with an automatic transmission (well, technically a single-speed reduction gear, but let’s not delve into the cutaway drawings here . . .) and, of course, limited one-charge range (as little as 100km depending on the car, the conditions, the state of the battery etc) but the idea is at least an intriguing one.

Insurance is really the deciding factor when it comes to any first car choice. If you’re under 30, you’re going to get hammered for that first-year premium, and will probably end up paying more than the value of your car in insurance costs.

Figures given to The Irish Times by insurance firm Coverinaclick. ie show that a 21-year-old driver on a provisional licence could pay as much as €3,936 for their first year’s premium. But, by getting their mandated 12 professional lessons, passing their test, and keeping their noses clean to get a first year of no-claims bonus, that premium could fall to €936 in year two.

Jonathan Hehir, managing director of Coverinaclick.ie said: “Look at the model and engine size of the car you are going to buy. Don’t be afraid to ask for different quotes for various cars. Check the differences between third-party fire and theft and comprehensive, according to the value of the vehicle. And remember that some insurance companies specialising in insuring young drivers are only available through certain brokers.”

Of course, one of the biggest issues in insurance terms right now is Irish insurers’ reluctance, and sometimes outright refusal, to insure cars that are more than 10 years old, a decision grounded in actuarial data that seems almost specifically designed to strike at the youngest, and most cost-conscious, motorists.

Servicing costs are your next big concern, because it’s vital that you keep your car healthy to both keep it on the road and keep yourself safe when driving it. On top of which, according to research from car history experts Motorcheck, a fully stamped-up service history can add as much as €1,500 to €2,000 to the value of a car priced at about the €5,000 to €6,000 mark.

But back to the original question: what’s the best car for a first car? The variables are innumerable, and it would be tempting (and temptingly easy) to just say, at random, one of Fiesta, Polo, Micra, Yaris, or any other small, predictable hatchback and be done with it.

There is a another option, though. How about a Mini? The current Mini, launched originally in 2001 (under the R50/R52/R53 designations) and the subsequent 2006 replacement (the R56 model, which ran until 2013) has had its reliability issues (catalytic convertors, power steering, clutches, and wheel bearings are all common problems) but if kept serviced, they’re solidly reliable.

Go for a post-2006 model and that upright windscreen means you have great visibility, while the sharpness of the steering, and the balance provided by that BMW-derived rear axle will give you a good early introduction to just how good to drive a car can be.

It’s a five-star car on the EuroNCAP crash safety test, (four stars for the older models) too, and steering clear of overtly sporting Cooper models should keep the worst of the insurance ghouls at bay. Added to which it’s stylish enough to cut a dash in any social situation, comfy on a longer drive should you need it to be, and, hey, it’s a Mini – having one as your first car has been something of a tradition since 1959 . . .

Is this the beginning of the end? Who knows, but general practice is open
3

‘Get off your phone/laptop/console,’ I roared through 2019. Now I say the opposite
5