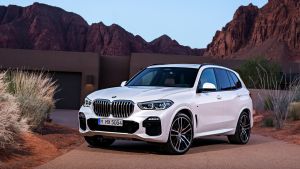 You know the techies are taking over the motoring world when the gadgets start to get outlandish. In the BMW X5, the major talking point isn’t the muscular styling or the engine growl. It’s not even the cut-glass gear knob. It’s the air conditioned cupholders.

Yes, you read that right. The cupholders can either be heated or cooled via the car’s air-con to keep your coffee mug warm or the water bottle nicely chilled. If you haven’t bought a new car for 10 years or so, I promise you your next visit to a car dealership will blow your mind. Or scare you on to the buses, depending on your attitude to tech.

I came to this car with some cynicism. BMW’s big SUV has always been about the bling. If the Range Rover is for the green welly brigade, the X5 was for folks whose idea of off-roading is having to park on the grass verge at Avoca.

The issue with the X5 in the past has been that it didn’t age well. It may have boasted of being “the first sports activity vehicle” (whatever the hell that meant), but even in 1999 the first generation couldn’t overcome the sense of being a large hatchback hoisted on to stilts. It wasn’t helped by a tiddly little grille, at least by SUV standards. The second generation made an effort to get its proportions right, but again it lacked the necessary muscle. Audi’s frightening Q7 sent it scurrying to the hard shoulder. The third generation of the X5 in 2013 added more clout and the car could stand up for itself, though it was still built on the same chassis as the previous version. Now comes gen four and suddenly the X5 has come to market ready to fight.

Still shipping from Spartanburg, South Carolina in the US, this beemer promises the lap of luxury with sporty styling and some downright menace. Finally the kidney grilles up front look like they mean business.

You can’t underestimate the importance of the X5 – and its upcoming seven-seat sibling, the X7 – for these are the modern-day flagships for the brand. Forget about the 7 Series: that’s for ferrying Irish and Indian presidents around. The well-heeled tycoons drive – or are driven – in luxury SUVs these days. Today’s limo isn’t stretched, it’s an SUV.

Our test car fitted the bill. Let’s go back to the interior for a second. BMW has been playing second fiddle to Audi for several years now in terms of its adoption of technology and useful practicality in the cabin. The company that gave the world the iDrive dial system – initially panned but quickly adopted in varying formats by its rivals – got lost in a tech tailspin when touchscreen, motion control and voice systems landed on the market. The end result was cabin confusion.

Finally things are starting to settle and the X5 layout is smart, elegant and relatively easy to use. There are too many gadget tricks to go into in a regular review, but suffice to say the engineers seem to have spent as much time on pampering the occupants as on engineering the driving dynamics. That’s in keeping with what you expect at the luxury end of the market.

As for the drive itself, the acoustic glass windscreen is a new feature and it certainly helps keep out the diesel rumble, though our test car was also fitted with the optional acoustic side windows, which undoubtedly also helped add to that sense of quiet refinement. The nice thing about this feature is that it doesn’t muffle the engine notes you like to hear, so when you kick down hard there’s a lovely rumble. Admittedly it’s largely artificial, for up front is not a growling V8 but rather a straight-six 3-litre turbodiesel. Yet it does the job.

While diesel is certainly in terminal decline, it will remain the mainstay for this size of car for the next few years, although some may be tempted towards the 3-litre petrol alternative. A V8 is on the way in the form of a plug-in hybrid.

The beauty of the 261bhp diesel, however, is that BMW has managed to live up to the more stringent fuel and emissions regulations without compromising on performance. In contrast, several of its rivals have resorted to constantly intervening to slow or regulate their engines, resulting in sluggish, frustrating drives. This 3-litre and the eight-speed transmission delivers power smoothly. It never feels sports-car fast if you stomp on the throttle, but that’s largely down to the cosseting of the cabin rather than the reality on the road. This big SUV is quick.

The biggest boon of the X5 remains its driving dynamics. For all the issues with the styling of earlier generations, at its heart the X5 has always been one of the best SUVs to drive on the road. Only the Range Rover Discovery came close enough to challenge BMW’s ability to deliver any sort of sporty handling to a lumbering behemoth like this. The new chassis builds on that reputation, now challenged by newcomers like the impressive Audi Q8.

The X5, as expected, delivers four-wheel drive, with the rear axle doing most of the heavy lifting. Our M Sport pack meant an electronic rear diff lock came as standard, along with height adjustable air suspension, which will not only help on offroading but also delivers in terms of practicality by lowering to a regular saloon car height when you need to load heavy goods in the boot, or children in the back. On that point, BMW claims you can also get three child seats fitted across the back seat, still one of the few cars able to deliver on this despite all the manufacturers’ now promising better family practicality.

The air suspension also delivers an excellent ride, while the car’s adaptive steering feeds a proper sense of control and feel from the road through to the driver.

This is the lap of luxury, but it doesn’t come cheap. Prices for the new X5 start at €87,390 but it doesn’t take long lingering on the options list to pass the €100,000 mark. By the time our test car was dressed in M Sport pack and additional features such as a panoramic roof and gorgeous 21-inch alloys, the price had hit €125,798. That’s serious cash to lay out on a car in the midst of a motoring revolution where technical and technological redundancy is likely to hit resale values in the coming years.

Yet up against its direct rivals, this X5 easily holds up to scrutiny. It’s much better to drive on the road than anything else in its class (though closely followed by Audi’s Q8). It still looks a little too bling for my taste compared to the sleek styling of the Range Rover set, but there is no questioning the luxury and refinement on offer.