Skoda considers move into US market 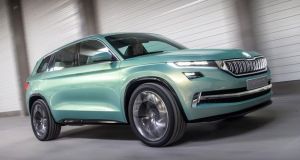 Volkswagen’s Czech division Skoda is considering selling cars in the United States, where its embattled parent is trying to recoup sales lost in the wake of the diesel emissions scandal.

As part of Volkswagen’s (VW) so-called strategy 2025, mass-market brand Skoda is assessing the potential of regions where it does not yet sell cars, including North America, a spokesman at Skoda said on Monday, adding that a decision on the matter is not expected any time soon.

The move reflects VW’s growing optimism that a series of new products and a campaign to enhance the brand’s image will repair the damage done in the United States, where its rigging of emissions tests came to light almost nine months ago.

Over the past eight months U.S. sales of VW-branded cars have plunged more than 10 percent year on year to 207,800 vehicles, VW records show.

Analysts are sceptical about Skoda’s prospects for success in the United States. Previously positioned as VW’s budget alternative for eastern Europe and Asia, Skoda has been slow to enter the market for crossover and SUVs that are so popular with US consumers. It is, however, preparing for the launch of a new SUV, the Kodiaq, in September, which could be a precursor to a US market entry.

NordLB analyst Frank Schwope said that the carmaker would have to fight tooth and nail in the United States, citing the country’s saturated market for passenger cars.

“Skoda would do better to get engaged in emerging markets like India or South America,” he said in comments echoed by other analysts .

Yet Skoda, which increased first-quarter profitability to 9.3 per cent from 7.6 percent a year earlier by virtue of cost cuts and improved sales of higher-margin models, appears serious about its US ambitions.

The brand has filed several trademarks with US authorities to protect the names of models such as Superb, Octavia and Yeti, the spokesman said, in a move that could be a precursor to market entry.

A foray into the United States would not be Skoda’s first, however.

In the late 1950s, long before VW fully acquired the company in 2000, the Czech brand started exporting its Felicia compact to North America before taking it off the market a few years later because of poor sales.