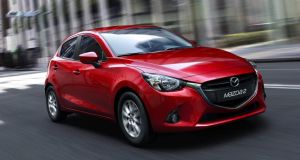 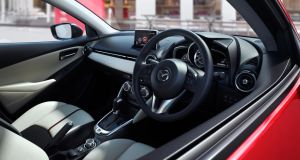 After four years of hefty losses, Mazda is back in profit and as if to mark the occasion they’ve got a great looking supermini arriving here this March.

It’s the first of a trio of new cars coming to forecourts in 2015, something that may well signal a significant revival in its fortunes.

Despite a strong reputation in the past for reliability and a sprinkling of really exciting successes, the Japanese firm still struggles to get its message across in a crowded new car market. Part of that is down to the volume of heavyweight competition it’s up against, but also partly due to the firm’s global marketing message, laced with awkward attempts to create all-encompassing terminology to encapsulate its engineering and design messages.

Frequent reference is made at presentations to SkyActiv, which sounds like a parachute club for the over-70s, and to its Kodo design language. Whatever about the former – which is essentially the evolutionary improvement in developing all the parts that make a Mazda – never dare to get a Mazda staffer to explain to you what Kodo design language is about. Instead, just take a look at models such as the Mazda6, CX5 and now the new Mazda2 and admire the end result.

And it’s worth admiring, for this latest supermini is arguably the best looking car in its class. It has hints of styling cues from the eye-catching Alfa Romeo Mito, but it’s a better car and it loses some of the Alfa’s quirkier traits. You don’t need to learn the Kodo lingo to see that it delivers.

The multiple creases on the side show it’s not a car designed solely with production costs in mind, while the surprisingly well-proportioned front nose delivers the first small car to pull off a large grille that won’t frighten children. And it wears a numberplate well.

Tech plays a big part inside and even on the entry-level version there’s a nicely laid-out central control screen, while the higher-end Executive SE version gets a seven-inch colour screen operated through a dial and button combination that’s similar to what features on premium market models.

The Mazda2 will be offered with two engine options, a petrol and a diesel. Given the price differences on both, it would seem to make little sense to opt for the diesel.

Of the petrol options the 1.5-litre engine comes in either 75bhp or 90bhp. Again having tested both, I can see no reason to spend extra on another 15 horsepower, unless you want the extra equipment that comes with the GT version.

While snow-covered Spanish roads meant we couldn’t test the Mazda2’s handling ability to full effect, the fact we were confined to the city streets of Barcelona and its suburbs meant we did test the car in the sort of habitat where it will most reside in real life. And as we suspected, it delivered in terms of nimbleness in tackling tight turns and winding through heavy traffic, while the 75bhp could be called upon to dart ahead of other traffic in order to secure the best lane. It delivers with aplomb in city and suburban driving.

There are also some nice little touches to the car, such as the notchy five-speed transmission and a gear stick that’s just to hand like you’d want in a much sportier car.

These range from the deep well in the boot, through to the way the rear glass sweeps up to a pinch at the end, limiting rear visibility for backseat passengers, particularly children. Head and legroom in the back is adequate rather than impressive. And the way the cabin wraps around the driver can be appreciated as a cosseted feel or alternatively as a little cramped depending on your viewpoint – and indeed on your mood.

If you are looking for a great looking supermini, then the Mazda2 delivers. I cannot see any reason to opt for the more expensive 90bhp GT unless you prefer the interior trim and styling, and I certainly can’t think of a reason to hand over €23,000 for a diesel version.

In terms of specification, while the entry-level at €16,000 may seem like a decent price on paper it’s too sparsely equipped to really be worth considering, particularly when you see that on the Executive version at €17,000 you get additional features such as 15-inch alloys, front fogs, split rear seat, electric windows front and rear, cruise control and Bluetooth. You can add features such as the seven-inch colour display , a city braking system and lane-keeping alert, but then the price starts to move up towards the €20,000 mark.

So to summarise, for all the variants on the list there is only one Mazda2 Irish buyers should really consider: the 1.5-litre 75bhp petrol Executive version for €17,000. It could,

and should, be better priced if it really wants to steal attention away from big-name rivals such as the VW Polo, Skoda Fabia or Ford Fiesta. And pricing is probably not helped by the weakened euro, given that cars coming to Ireland are being built in Asia.

This is set to be a busy year for Mazda with some key models on the way. A welcome return to profitability is likely to be bolstered by the arrival of the new CX3 small crossover, introducing the brand to a lucrative segment of the new car market. It’s hard to see how this upcoming car will not be a sales hit. At the other end of the spectrum is the latest generation MX5, arguably the icon of the brand and though sales volumes will be relatively small, it remains a car with a cult following.

When the Mazda2 arrives here in March it sets the scene for some great looking cars, built by a firm that retains a great deal of consumer respect for reliability and occasional iconic cars. If maximising space and practicality is not an overriding concern, then this is certainly worth considering.

‘We cannot get sick here. It will spread.’ Norman lives with 19 others in Phibsborough
9

Lisa Hannigan on Damien Rice: “He didn’t want me in his band anymore, so I left”
10