Penny-pinching on tyre tech is putting lives at risk

Car makers accused of fitting unsafe pressure monitors to save €10 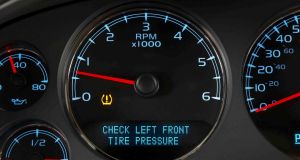 Europe’s car makers are coming under fire once again for wriggling around the edges of legislation, but this time it’s on safety grounds, not environmental worries. Pressure group Transport & Environment (T&E) has accused European car manufacturers of penny-pinching, and fitting inaccurate tyre pressure monitoring systems (TPMS) to save money.

Tyre pressure monitors have been a legal requirement on all new passenger vehicles since November 2014, under EU legislation, but the problem, according to T&E, is one of quality of equipment. There are, it seems, expensive tyre pressure monitors, which actually use calibrated sensors inside the wheel to measure the air pressure, and cheaper indirect systems which rely on detecting wheel rotation and vibration to estimate the internal pressure. T&E says that the second, cheaper type, which costs around €10 per vehicle to install, is woefully inaccurate.

Indirect systems will pass the basic laboratory-based tests used to “type approve” a new car for sale, but T&E claims that it has put both a VW Golf and a Fiat 500 equipped with such systems through a battery of real-world tests. In an echo of “Dieselgate” the results, in which the Golf failed 14 out of 16 tests and the Fiat all 16, show that lab testing is inadequate to the task of ensuring proper on-the-road safety.

Julia Poliscanova, clean vehicles manager at T&E, told The Irish Times that “with Dieselgate, car makers were caught wilfully putting the public’s health at risk from poisonous emissions. Now we find manufacturers could be deploying similar defeat devices to get ineffective tyre pressure monitoring systems to pass safety tests and save themselves €10. Investigations of the suspicious TPMS performance must be carried out. Our tests clearly show that the unsafe indirect systems put drivers, pedestrians and cyclists at greater risk of dangerous blow-outs.”

“The most suspicious results were obtained when the same regulatory test was repeated on tyres with some mileage; the TPMS failed to alert drivers of tyres’ low pressure. This indicates that the indirect systems were primed to get through official tests but become less sensitive once they were used on the road. Car makers may be optimising indirect systems to be less sensitive after the initial test as their detection is based on wheel vibrations and rotations which could be falsely triggered in various real-world conditions like varying road surfaces and temperatures, and cold or slippery weather.”

T&E has suggested that moving to a US-style system, where vehicles are re-tested over their lifetime, could compel car makers to fit direct pressure monitors, or that the legislation needs to be changed to outlaw indirect monitors.

However, tyre companies are saying that motorists need to be more involved in ensuring that their tyres are safe, and should not simply rely on systems fitted to the car. Jamie McWhir, Michelin’s technical manager for car and 4x4 in the UK and Ireland, told The Irish Times that “effective technologies to monitor the pressure and condition of tyres is to be welcomed, but they shouldn’t take the place of driver responsibility.

“Regular manual checks are vital, not just tyre-pressure checks but also tread depth and damage checks. Michelin has tested more than 20,000 cars in the UK and Ireland over the past nine years as part of its ‘Fill Up With Air’ campaign, and more than a third were found to have at least one tyre that was either ‘dangerously’ or ‘very dangerously’ under-inflated. That situation has to improve if we want to reduce accident and injury rates.” Michelin did issue a statement that it advocates the use of direct, rather than indirect monitors though.

Julia Poliscanova thinks that new legislation is the only way to ensure blanket safety standards across all cars, saying that “the EU has a unique opportunity to phase out this ineffective safety equipment in its upcoming review of the General Safety Regulation and mandate that TPMS should perform in real-world conditions and with all tyres, including replacement ones. The European Commission should also use current negotiations on the new Type Approval Framework Regulation to ensure tyre pressure monitoring systems are checked over their lifetime on the road by the national market surveillance authorities and the Commission.”

Tyre pressure monitors are currently a failure point on the National Car Test (NCT) but it is simply a check to see whether or not is is functioning. The TMPS warning light on the dashboard must come on, and switch off again within a few seconds to pass, but there is no investigation made of whether or not the system is accurate.

I wanted to learn more about how sex gets better with age, but my battery was running out
8