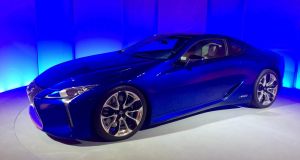 New Lexus LC500h: premium brand returns to the sports car market for the first time since the SC430 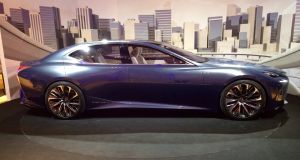 Lexus has brought its new LC sports car to Europe and in turn unveiled its new 3.5-litre V6 hybrid 354bhp LC500h version. The new LC, which will hit showrooms in Spring 2017, has its eyes on becoming a fully-fledged rival to iconic European sports car rivals.

It marks a return for the premium Japanese brand to the sports car segment for the first time since it ended production of its SC430 in 2008. The SC wasn’t a big success in Europe, but Lexus believes this is a much more competitive proposition.

Key target rivals will be the Jaguar F-Type and high-end BMW 6-Series models. The car’s chief engineer says he has benchmarked it against the likes of Porsche 911 and Maserati as well. While Lexus executives say it is too early to discuss pricing for the new car, we suspect it will start above €120,000.

Debuting officially at the Geneva auto show next month the LC500h version follows on from the unveiling of the non-hybrid LC500 with a V8 5-litre 450bhp engine at the Detroit show. That version will also come to Ireland and is likely to start closer to €150,000. A future range-topping F Performance model is likely though unconfirmed. F Performance is the hard-edged sports division of Lexus, akin to BMW’s M Division or Mercedes AMG.

The design is certainly striking, and has picked up two awards already, one for its new interior. It’s much more elegant than some of the more polarising design emanating from Lexus these days, but it retains the trademark big grille.

Along with the sleek styling and the confident return to market in this category, the LC500h also marks the first use by the brand of lithium ion battery packs.

Toyota has used lithium batteries in its Prius plug-in and Prius+ models but has been slow to replace nickel-hydride packs - in cars like the new Prius - over concerns about long-term durability. The argument is that the benefits are not strong enough to warrant wholesale adoption. However it does come with significant weight advantages, all-important in the sports car market.

The car sits on an all-new platform from Lexus, with the rear-wheel drive format and electric power steering system. In the LC500h the battery pack is housed behind the rear seat bench. The car’s platform will underpin future Lexus models.

One of the criticisms of the previous SC430 was the harsh ride on European roads. The LC’s chief engineer assures us the new car has undergone rigorous road tests on all types of road conditions and this will continue right up until the sales launch next year.

At the same event in astonishing Louwman auto museum near The Hague, Lexus also showed off its latest concept, the LF-FC. The large saloon concept aims to showcase the brand’s plan for a hydrogen fuel cell model with a target date for production of 2020. It follows on from the Toyota Mirai fuel cell car last year, which is already on sale in four European markets. The aim is to have a Lexus equivalent in the near future. However, with Ireland still without a single hydrogen filling station the chances of seeing either the Mirai or a production version of this Lexus on our roads seems remarkably slim. Toyota Ireland continues to advocate the installation of a small network of hydrogen filling stations but no one seems to be biting just yet.

A final mention must go to the auto museum itself, the oldest private car collection open to the public and built up since 1934 by generations of the Louwman family. It’s a must-see for car fans and worth a detour if you are visiting the Netherlands.

The Louwman’s are also the Dutch distributors for Toyota and Lexus - along with several other brands - so it was a fitting home for the premium Japanese brand to present its vision of the future.

While Lexus is only 26 years old - a relative newcomer in this company - it clearly believes it deserves its place alongside the classics on display. Time will tell if the LC makes it into a future Louwman’s display.

Generation panic: why is there so much anxiety among millennials?
9

Valentine’s in an Irish restaurant: ‘Some couples barely speak to one another. Most don’t tip’
Real news has value SUBSCRIBE