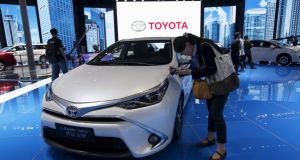 The number of new private cars licensed so far this year has surpassed 100,000, a level not seen since 2008.

Figures from the Central Statistics Office (CSO) show 108,522 new private cars were licensed during the eight-month period, a rise of 31.5 per cent compared with the same period last year.

Car sales, boosted by the introduction of the new duel registration system, has been one of the strongest performing retail sectors.

The figures show the number of used (imported) private cars licensed fell by 11.9 per cent compared with the same period in 2014.

On a monthly basis, 8,572 new private cars were licensed for the first time in August, an increase of 38.2 per cent on the same month last year.

A total of 3,666 used (imported) private cars were licensed, representing a fall of 14.3 per cent on the same month last year.

Aimsir, Co Kildare: The restaurant that puts Ireland on a plate
3