Legislation ends the ability to claim car was off the road 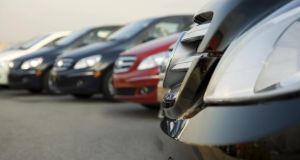 Legislation to end motor tax evasion, which costs the State more than €54 million a year, comes into force today.

Motorists who do not have up-to-date tax discs will no longer be able to claim their vehicle was off the road.

Previously, motorists with untaxed cars could submit a non-use declaration at a Garda station. The signature of the declaration had to be witnessed by a garda, but no other documentary evidence was required to remove the liability to pay motor tax.

The system was open to abuse as it left the possibility of motorists continuing to drive after their tax had lapsed and afterwards explaining the gap in their cover by declaring their car was off the road.

The change in the law will require anyone intending to take their car off the road to make a submission in advance to the motor tax office, and not gardaí, and to pay any arrears plus a minimum of three months’ tax.

Motorists can make a submission that their car will be off the road for between three and 12 months in a calendar year. Those making a false declaration face fines of up to €4,000 or six months in prison.

The new system allows those who have legitimate reasons not to tax their vehicles to be facilitated, Minister for the Environment Phil Hogan said.

“There are many valid reasons why people may wish to put their car off the road for a while, such as working abroad for a time, and they will be facilitated, so long as they let their motor tax office know in advance. We are targeting those who evade paying their motor tax,” he said.

A Dáil Public Accounts Committee earlier this year heard that motor tax evasion costs the State more than €54 million a year and runs at about 5 per cent versus 0.7 per cent in Britain.

“Compliant tax-payers should welcome this move – up to €55m per annum is not collected currently through tax evaders taking a holiday from paying their motor tax,” Mr Hogan said.