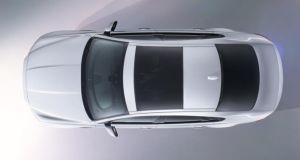 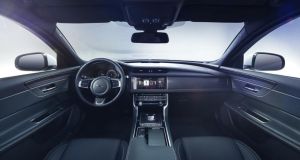 New XF’s cabin mixes cues from the current car and the new XE.

The XF, more than any other car, is the car that saved Jaguar. Launched in 2007, into the teeth of the growing financial crisis, at a time when Ford was preparing either a bill of sale or euthanasia contract for Jaguar, the XF at a stroke did away with the tired, retro-designs of the nineties and early-2000s and set Jaguar on a course for rebirth and success under Tata ownership.

Now, it’s due for replacement and to judge from these initial photos, Jaguar is playing things very, very safe with its second generation XF. So far all we have is a full shot of the interior (which seems to rather pleasantly mix cues from the outgoing XF and the new, compact XE) and an overhead shot of the exterior. The outside looks, from that angle, as if Jaguar is keeping the new XF looking very much like the current car. Perhaps, given that the XF still looks fresh and sharp after eight years in production, that shouldn’t be so much of a surprise. Speaking about he styling ahead of the car’s reveal, Ian Callum, director of design for Jaguar, said that the XF will be “elegant, handsome and with proportions that imbue a great sense of integrity. It will be true to the strong tradition of sporting Jaguar sedans, while being completely of its time.”

Under that familiar skin, though, it’s all change. The existing XF is that last holdout of conventional steel construction in the otherwise all-aluminium Jaguar line-up. It’s a structure that can be dated back to the 1998 S-Type (and therefore also to an old US Ford-Lincoln chassis) so it’s well overdue for replacement. The current XF’s relative mass and cabin space compared to a BMW 5 Series is a constant reminder of the age of its bones.

So, the new one will get an all-aluminium understructure, the lightness of which will be underscored on the 24th of March in London when stuntman Jim Dowdall is due to drive a new XF across the Thames river, balanced on just two 4cm-diameter wires.

Key engines for the new XF will be the new four-cylinder Ingenium petrol and diesel units, which we’ve had a brief chance to sample in the new XE. The 190hp diesel will be the big-seller, and promises fuel consumption of 70mpg and emissions of around 105g/km. V6 petrols and diesels (including a sporty version using the F-Type sports car’s supercharged V6) will also be available and the range will again be topped by a 550hp supercharged V8-engined XF-R and XF-RS.

There will be a stretched long wheelbase version too, but that will be only for the Chinese market, but Europe will definitely get a second generation Sportbrake estate. And what about a plugin hybrid?

Jaguar doesn’t have any existing plugin or electric models but a prototype XE wearing a new and previously unseen ‘E’ badge has been spotted, and rumour has it that this is using a plugin drivetrain combining an electric motor packaged into its ZF-supplied nine-speed automatic transmission and the new Ingenium 2.0-litre turbo petrol engine providing the internal combustion power. Jaguar has in the past dabbled with range-extender prototypes, including an XJ partly-developed with Lotus that used a combination of batteries and an ultra-compact three-cylinder petrol engine, and of course the C-X75 plugin hybrid supercar prototype, which was originally designed around tiny twin jet turbine engines that kept the batteries for the electric drive motors topped up.

Two great, all-purpose wines from Burgundy for under €10
6