First it was front-wheel drive. Now a seven-seat people carrier. Has the German brand built what it said it never would? 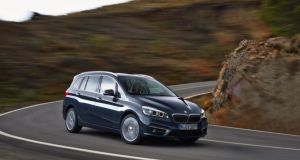 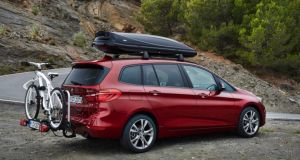 BMW’s new 2-Series Gran Tourer - a family-sized people carrier, though don’t expect the Germans to refer to it as such 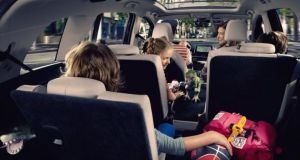 The arguments about BMW’s right to build the front-drive 2-Series Active Tourer have barely died down and now this.

BMW is claiming the 2-Series Gran Tourer is the first premium compact model in the world to offer seven seats and it does it on a stretched version of the UKL architecture that also underpins the new MINI three- and five-door models.

Another area where it differs significantly is in height, where the 2-Series Gran Tourer is, at 1,608mm, 53mm taller than its sibling.

The new car, which will make its public debut at next month’s Geneva Motor Show, uses the same engines, gearboxes and suspension systems as the Active Tourer.

The most powerful of the 2-Series Gran Tourer’s motors will be houses across the nose of the 220i, delivering 141kW of power and 280Nm of torque. While blistering acceleration scarcely seems the point of this sort of car, the 220i version will manage to get itself to 100km/h in 7.7 seconds, which seems quicker than it needs to be.

It’s a fair bit sharper than its 100kW little brother, the three-cylinder 218i, which manages the same sprint, eventually, in 9.5 seconds. Still, the little engine delivers an NEDC combined economy figure of 5.1 litres/100km to best its faster sibling by a full 1.1 litres.

The 270Nm three-cylinder diesel is at least frugal on the NEDC combined test, with a combined consumption figure of 3.9 litres/100km to boast emissions of just 104 grams of CO2 per kilometre.

The 218d is slightly thirstier, though still uses an acceptable 4.3 litres/100km while the flagship diesel posts 4.9 litres/100km.

While six-speed manual transmissions will be standard (at least in Europe) across the range, the three-cylinder versions will have optional six-speed automatics and four-cylinder buyers can choose an eight-speed auto. The 220d justifies some of its added heft by using the eight-speed auto as standard equipment, while it adds 30kg to the 218d and the 220i.

BMW has tried to maximise the car’s interior flexibility by giving the rear seats the ability to slide fore and aft by 130mm, while it divides into 40:20:40 configuration to fold flat at the touch of a button (or buttons). The rear seat is claimed to be wide enough to carry three baby capsules or seats simultaneously.

The optional third row of seats can be folded flat into the boot floor when it’s not in use.

It is also trialling an app especially for entertaining children. Available in Germany only (for the moment), the myKIDIO app sources and plays kid-friendly (and appropriate) content, from movies to TV shows to audio books, to be played on a tablet attached to the rear of the front seat. Or to the rear of the second row of seats.

The front-seat occupants are always in charge of what’s being shown to the children and the content description is always displayed on the front multimedia screen. It can also be changed from the front on the iDrive controller. On the flip side, children in the rear can also access on-board computer information, such as speed, distance travelled, how many kilometres remain on the drive or the outside temperature.

All models of the car have a 6.5-inch multimedia display as standard equipment, plus Bluetooth and the ability to stream live music or podcasts from compatible smartphones.

Its options include a head-up display, a panoramic roof, dynamic damper control for adjusting the ride quality, hands-free tailgate operation, radar cruise control and the Driving Assistant Plus that will take over the hard work of stopping and going in traffic jams.