Golf GTI comes to Ireland in the autumn with more power, more tech 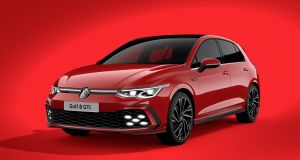 We really shouldn’t be here. Originally, when Volkswagen developed the first Golf GTI in 1976, it was expected that only about 5,000 cars might be sold. Indeed, we still ought not be here – that original GTI was left-hand drive only, and it took massive lobbying by both VW’s UK importer, and the efforts of some Irish rallying fans, who converted early cars to right-hand drive, that we can enjoy a Golf GTI with the steering on the correct side. And here we are, 2.3 million sales on, and with an eighth generation shortly to arrive.

The headline news of the new, Mk8 Volkswagen Golf GTI is that it’s basically the same. As with the Mk8 Golf in standard form, the chassis underneath – VW’s now-familiar MQB platform – remains in its essentials the same. The same 2.0l turbocharged petrol engine still provides the power, and there’s still a choice of a six-speed manual gearbox and a seven-speed DSG dual-clutch transmission.

Even the price will remain basically the same, at around €46,000 when the new GTI goes on sale here in Ireland in the autumn (all things being well, of course). Standard equipment will include keyless entry, 18in alloy wheels, Matrix LED headlights, three-zone climate control, and a new suite of electronic driver aids to aid safety.

So what is actually new? For that, we need to delve a little deeper into detail. The GTI’s suspension remains the same as before – MacPherson struts up front and a “multi-link” arrangement down the back, but there have been changes. The whole car sits 15mm closer to the ground than does a standard Golf, and the springs and dampers are a little stiffer than you’d have found on the old Mk7 GTI – by five per cent at the front, and by 15 per cent at the rear. The XDS locking differential, which was an option on the old GTI, and which improves grip and traction at the front, is now standard.

VW says that this stiffening, and a move to decrease aerodynamic lift at the back, while actually slightly increasing it at the front, is to provide the car with maximum possible agility at low speeds, but with maximum possible stability at higher velocities. According to VW test driver, Benjamin Leuchter, it also makes the Golf GTI considerably more frisky. “You have the possibility to have some slides or slow drifts. In general, you see that the test track is like a rally stage; very tight and narrow. And our goal was to get a very chill car in slow speed corners like 180 degrees hairpins, for example, with slow speed around 60km/h to 70km/h, but at the same time on speed sections like where we come through with around 180km/h that you really have a stable car,” Leuchter says.

That combination of talents is partially down to the new VDM, or Vehicle Dynamics Manager, system. This combines the CDX differential, and inputs from all of the car’s other driving systems, to tweak and adjust the throttle response, the steering response, the suspension stiffness and more, at speeds of up to 200 times per second, according to how the driver has set the car up. To do that, there’s a slide button on the central digital touchscreen. The normal settings are Eco, Comfort, Sport and Winter, but if you slide the button all the way to the right, to a Spinal-Tap-esque position 15, you get to a setting beyond Sport, in which the stability control is fully disabled and the car is at its most analogue. “Yeah, you of course can have a lot of fun with the car,” says Leuchter.

The new GTI is, according to VW, definitely quicker than the old one, passing through a 3.3km test course some four seconds faster than the previous model. Quite how that will translate to everyday, law-abiding driving remains to be seen.

On the style front, the Golf, as with the standard model, looks much the same as before, but again with detail differences. The nose of the car dips down more, and the headlights are slimmer and lower. Breaking away from ultra-subtle GTIs of times past, chief designer Klaus Bischoff has given the car a vast air intake in the lower bumper, with a honeycomb pattern and 10 indented LED foglights. “A GTI owner wants to show that they have a GTI,” Bischoff says. “But this needs to be done with style. If you compare the GTI to the normal Golf, this is much more stylistic, but also a purist approach to design – not too loud, but also not too silent.”

Inside, there are high-backed bucket seats with the distinctive GTI tartan cloth centres (the weave has been subtly altered for an effect that mimics a digital pattern) and the same digital instruments and high-set touchscreen as in the standard Mk8 Golf. That means you can have GTI-specific instruments – with a combined speedometer and rev-counter front and centre – and a heads-up display that reflects directly on the windscreen, rather than through a small “monocle” screen. That central touchscreen is not without its detractors though – some have found the touch-sensitive too sensitive, moving when they rest their hands near it. Bischoff is convinced that it’s customers, not the car, that need to change though. “We are we are sure that we did the right step towards digitalisation,” he says. “Of course, if you if you do such a big leap forward, you have to be brave and you need to be sure that you do the right thing. You need a bit of time to get used to the abilities of these systems, but that counts for all digital devices – you grow with it.”

Karsten Schebstadt, the man in charge of the GTI’s technical development, was also on the defensive, justifying the decision not to add a mild-hybrid system to the GTI’s engine, to improve both its fuel efficiency and its CO2 rating. “We felt that the GTI only should have a combustion engine, but in parallel, we will have another car available – the GTE – which will be a very good compromise with respect to the hybrid engine and you can be sure that this car will have very significant, very nice eco-dynamics performance,” Schebstadt says.

The GTI will arrive at a deeply uncertain moment – it will hopefully be at the point where the Irish economy is starting to fully awaken from its enforced shutdown, but the general financial health of the country will doubtless be in a very bad way. A €46,000 Golf might seem like a car arriving with poor timing, but there is an argument that says that the GTI, historically, is much more fun, and offers much better value, than high-performance offerings from other brands costing maybe twice as much. The only problem for the new Golf GTI could be that the hot Skoda Octavia RS is also due to arrive on sale at about the same time, and in the past it’s been the Skoda which has been the bigger Irish seller.