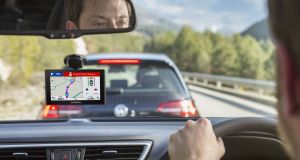 Garmin: It seems there is life in the stand-alone sat-nav yet with some innovations at a relatively affordable price point (€133-€400)

Garmin, one of the biggest names in satellite navigation, presented its new “Drive” range of personal navigation devices (PNDs) to the press at the famous Royal Automobile Club, Pall Mall, London, earlier this month.

The large elephant in the grand and historic room was the fact that most car manufacturers today offer varying forms of built-in sat-navs plus the meteoric rise of mapping apps for smartphones, which have surely made PNDs redundant?

It seems there is life in the stand-alone sat-nav yet with some innovations at a relatively affordable price point (€133-€400) compared with the cost of adding the features from a new car’s options list. It is drivers of low-specified used cars that can get the most benefit from PNDs.

For a small outlay, they can fit some pretty high-tech navigation systems in their machines.

The technology in the compact and ergonomically pleasing gadgets has advanced but there is little to excite when the devices are held up against some of the systems built in to cars these days.

Drive alerts, route overview, internet points of interest search, forward collision warning, voice activation and destination entry, advance junction view, live traffic alerts, go alerts (when traffic in front moves off) and, of course, messaging and Bluetooth connectivity are featured in the range and again when you put a PND in an older car these features are great to have.

One feature of particular significance is the built-in dash cam. Dash cams continuously record the view from the windscreen forward and if the car is involved in a collision the machine saves the recording. This video evidence would be valuable in any insurance claim.

The future market for PNDs should remain strong as they are ideal for cars that don’t have inbuilt systems. Often product launches feature a guest speaker to add a bit of interest and boost attendance. Garmin enlisted the original Top Gear Stig. Racing driver Perry McCarthy was the black-suited Stig and these days he is a passionate advocate for safer road driving.

He told us that today, cars are so much more responsive, powerful and brimming with technology that novice drivers should be restricted to small cc engines until they gain more real-life driving experience.

To illustrate the point McCarthy said that if he took a 1970s supercar and drove it flat out on his favourite back roads in Essex, he could then beat that time in a basic 1.1-litre Ford Focus.

McCarthy has raced at the highest level and went on to say: “No matter how fast the car is, as a racing driver you’ve got to be mentally faster than the car.” This simple and profound statement is something McCarthy said road car users should remember too.

“Whatever speed you’re doing you have got to be faster than the car . . .You’ve got to be the one that understands what is happening and the moment you lose that – slow down.”

McCarthy also praised Jeremy Clarkson and with a smile said that “as a driver . . . Jeremy is a great journalist!”

As for the new BBC Top Gear versus Clarkson, Richard Hammond and James May’s new Amazon Prime car show, the former F1 driver said the public’s ease of access to Top Gear will ensure a huge audience, but he added he was surprised at the amount of negativity towards the new series before Chris Evans and his co-presenters actually show what they can do.

Tanya Sweeney: I wish I’d kept my naked pics. I feared they’d end up in the ‘wrong hands’
Real news has value SUBSCRIBE