Ford gets orchestra to record warning chimes for Lincoln

Lincoln badge has suffered in sales and image terms, but Ford reckons it can still sing when needed 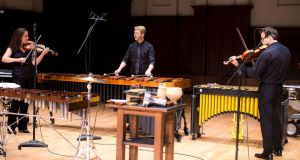 Ford doesn’t sell, nor ever has sold, Lincoln cars in Ireland or in Europe. The badge, named for America’s arguably most-beloved president, has been exclusively for North America since its inception. In spite of that fact, we all know what a Lincoln is. Why? Because we all saw John F Kennedy riding around in one. The events were tragic, but the mark of history means all of us are at least aware of Ford’s luxury brand, and its indelible connection to the US presidency.

From a height of more than 200,000 sales per annum in the 1990s, Lincoln now sells barely half that number of cars, but it has at least managed to increase those sales in the past couple of years, primarily off the back of badge-engineered crossovers.

So it is with the new Lincoln Aviator, a massive seven-seat SUV, based on the architecture of the new Ford Explorer (again, not sold here these days). The Aviator will be officially unveiled at the upcoming Los Angeles motor show.

What it has that no other car has is amazing warning chimes. Figuring that luxury car owners should have a specific, and more aurally pleasing, set of bongs and whistles, Lincoln commissioned an orchestra to create them. Yes, seriously - the Detroit Symphony Orchestra was drafted in to compose warning chimes for the Aviator that might just make it worthwhile trying to drive off with your door ajar.

A silly marketing gimmick? Oh yes, but while you might think it daft, we think there’s just a little touch of vehicular magic going on here. Ephemeral and ridiculous it may be, but the Aviator’s symphonic chimes might just make driving one that bit more interesting. Can we have one in Ireland now, please Ford?