If style and form are your heart’s desire, the Q8 is the best buy of all five-seat behemoths 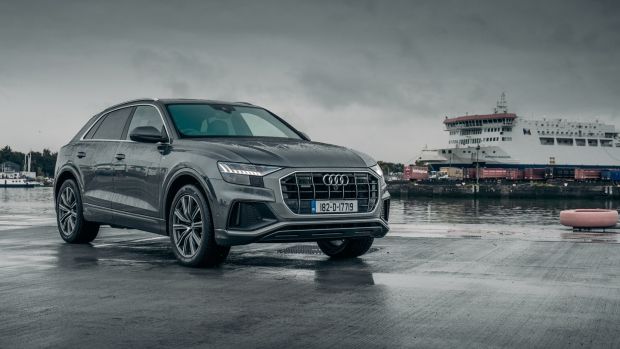 Before we get on the road I should declare I really don’t understand the attraction for this format of car. Take a low-slung coupe and hoist it in the air. Then load on an extra few hundred kilos. Alternatively take a functionally-focused SUV and slope the roof to reduce the bootspace and prevent the addition of a third row of seats. What you end up with is a car with less functionality than an SUV and less sportiness than a regular coupe.

And yet here we are in yet another German coupe crossover, this time courtesy of Audi. The high-powered product planners at the German car giant clearly believe in this format. And there are undoubtedly several days worth of Powerpoint presentation and pie charts to support their viewpoint. I still don’t get it.

However, as BMW showed with its odd-looking X6, some folks love this format. And given that the engineers at the VW Group are masters of repackaging, why not build the Q8? After all, what we have here is not an entirely new car. Under its skin are the same underpinnings of the Audi Q7, the new VW Touareg, the Porsche Cayenne, the Lamborghini Urus and even the Bentley Bentayga.

While Audi’s Q8 shares its general underpinnings with the seven-seat sibling Q7, the actual dimensions differ. For a start it’s shorter, but that’s understandable given it’s taking a five-seater format.

The test car was the 50, a non-prime number that is, however, a prime example of the naming convention being adopted by the four-ringed brand. Audi has abandoned the traditional way of identifying different derivatives by engine size. Instead it has chosen an arbitrary scale of numbers: the higher the numeral the bigger the output of the car.

In fairness Audi has a point. With most of its new models boasting at least mild hybrid electric support, and a fleet of new battery-powered models on the way, differentiating cars by engine size is increasingly arcane. After all, the latest one-litre petrol engines can outgun several much larger counterparts. Maybe Audi’s naming convention will not catch on, but they’re right that the relationship between cubic capacity and performance is over.

Deciphering the code means this Q8 was powered by a three-litre 286bhp diesel with and eight-speed tiptronic automatic transmission. In this crossover it delivers a 0-100km/h time of 6.3 seconds.

Pitching those figures against the reality on the road, two traits are quickly evident. First, sport mode does make this big bus move, even if there’s a noticeable momentary lag between kicking down the throttle and the Q8 hurtling towards the horizon. Yet it never quite delivers on the sporty promise. Unsurprising given that it weighs in at over 2½ tonnes.

With adaptive air suspension and all-wheel steering, the Q8 wafted along, unfazed by the rutted roads we encountered during the week. Occasionally the system got caught out by errant speed bumps and potholes, but in general comfort was the norm, even in sport mode. The only problem is it always feels its size. There’s little that suggests “coupe” about this car’s handling characteristics.

In terms of looks, while the Range Rover Velar remains the jaw-dropping benchmark, this certainly secures second place, well ahead of the odd-looking BMW X6 and the even odder Mercedes-Benz GLE coupe.

Little touches like frameless doors, a sharper sloping roofline and more defined rear pillars lend a coupe look to the car. Arguably the most striking styling touch, however, is the standard 21-inch alloys,with the option of stepping up to 22-inch if you really want to add more bling.

We didn’t really get a chance to stretch the Q8’s feet as much as we’d have liked – our fault, not Audi’s – but in fairness it was the second time we’ve been able to spend time in the car and on our first drive we got to pit it against three of its siblings: the new VW Touareg and at the other end of the spectrum, the Lamborghini Urus.

The VW is more practical, though it also boasts an impressive array of tech, while the Lambo is a more ludicrous, both in performance and price. The Q8 boasts styling as sharp as the Urus, tech as advanced as the Touareg (and slightly even more refined) and a price that’s just about bearable for buyers of luxury saloons. So does that make the Q8, the Goldilocks option? Arguably so.

The boon for the Q8 is that unlike many of its four-ringed siblings this is the best-looking Audi that can take more than two occupants. For once, Audi has let loose the reigns of its design team and the end results have paid off.

Pit this against the (still) odd-looking BMW X6 and Merc GLE coupe, or the gorgeous Velar and our money would be on the Audi, matching its own strong distinctive styling touches with impressive performance and the brand’s reputation for build quality over its British counterpart.

Its pricing does need careful attention, however. While the list price for our car was €102,200, our test car came with €24,444 worth of extras. That’s as much as many people spend on their new car. Some options were understandably pricey, like the high-end Bang & Olufsen sound system at €1,907. After all, you are lumbered with a hefty tax rate when adding options to a new car. But €2,304 for a heads-up display is too much, as is €1,060 for “power-assisted closing for doors”. It makes €432 for the “electric cover for luggage compartment” seem a bargain. And one offer on the options list, though not included in our test car, had me intrigued: Audi exclusive floor mats for €713.

And for all the focus on Audi’s electric future of late, this Q8 still has a three-litre diesel at its heart, swallowing 6.8 l/100km (41.5mpg) on official figures and emitting 178g/km of CO2, which incurs an annual motor tax bill of €750.

For all its elegance, the Q8 left me perplexed by these coupe crossover SUVs. In an effort to be all things to all motorists they never deliver properly in any one area. However, if style and form surpasses substance and function in your life then the Q8 is the best buy of these five-seat behemoths.

Verdict: Best of the bunch when it comes to image-conscious luxury crossovers. Still don’t understand why you’d bother though.

Róisín Ingle: I’m fourth in the queue and I’m emotional. And I’m not talking about jabs

Do you ever feel like a weed – a plant growing where it is not valued?