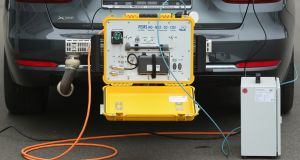 The debate over the future of diesel power kicked up a gear this week as campaigners and car makers butted heads, and disagreed over figures

The debate over the future of diesel power kicked up a gear this week as campaigners and carmakers butted heads, and disagreed over figures.

At the European Diesel Summit in Brussels, those in the anti-diesel camp said not enough was being done to tackle the crisis in air quality across the European Union, and levelled the blame squarely at carmakers not doing enough to clean up their vehicles.

The summit, organised jointly by such non-governmental organisations as the European Public Health Alliance, Eurocities (a representative group, which draws on the mayoral offices of 140 of Europe’s largest cities), and lobbying group Transport & Environment (T&E) said that too little has been done to tackle the estimated 43-million diesel-engined cars on European roads.

It ended by calling on the EU to enact a five-point action plan, including cleaning up existing vehicles and supporting the sale of newer, cleaner cars; co-ordinating the recalls and fixing of excessively polluting vehicles at the European level, rather than leaving it to member states; ensure that all vehicles undergo real-world testing to verify their emissions; create a “clean air fund” within the EU into which the car industry pays large amounts; and accelerate the uptake of cleaner electric and hybrid vehicles through pan-European legislation and infrastructural investment.

Carmakers have hit back, though, saying that current diesel types all meet current legislation, including the tougher real-world driving experience (RDE) test, and that the vast majority already meet the proposed, even tougher, 2020 legislation.

The ACEA, the group that represents Europe’s carmakers at a governmental level, says that it has put some 270 different diesel-engined cars through the RDE test, and that all have passed the current requirement, with most well below the current threshold for emissions of dangerous nitrogen oxides (NOx), the gas that’s linked with respiratory disease, and which diesel-engined cars emit in copious amounts if not properly engineered.

ACEA claims that its figures are backed up by independent testing by German’s ADAC (essentially the German equivalent of the AA) which shows that RDE-compliant diesels are some 85 per cent “cleaner” than older cars.

It’s possibly not as simple, cut, and dried as either side proclaims, however. EQUA, a part of the Emissions Analytics group which independently tests and monitors vehicle emissions, conducted its own real-world driving emissions tests. The results would seem to indicate that blanket bans and mass fines for diesel use are far too blunt an instrument to be using.

According to EQUA’s figures, from its tests which replicate the official EU real world driving emissions 2 (RDE2) test, the best-performing diesel engines are indeed running ahead of current legislation.

In fact, the top-performing 10 per cent were showing emissions of nitrogen oxide of just 61mg/km, which is not only less than the lab-test standard Euro6 emissions limit of 80mg/km, but well below the “conformity factor” of 168mg/km for the RDE2 test, set by the EU to give car companies a bit of breathing room to catch up with the new legislation.

The corollary of that headline-grabbing top 10 per cent, though, is a bad boy’s brigade of the bottom 10 per cent, where we find some diesel engines emitting as much as 911mg/km, more than 10 times the official limit.

Strangely, according to EQUA, it’s not necessarily down to the age, nor the sophistication, of the car or its engine. There are some older, Euro4 emissions regulations-compliant engines, which are emitting half as much NOx as these worst-performing modern units.