Practice is ‘rife in Ireland’: 10 per cent of odometers may show false reading 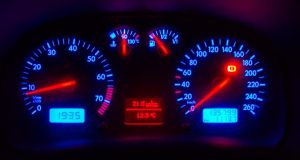 Clocking – the process of turning back the odometer of a car – will become illegal from today when Minister for Transport Leo Varadkar signs an amendment to the latest Road Traffic Bill.

Tampering with the mileage readout can increase a car’s second-hand value by several thousand euro. There have always been serious safety and reliability implications for unsuspecting motorists who buy clocked vehicles, but so far the people who do it have been guilty of an offence under consumer rather than criminal law.

The National Consumer Agency advises buyers to be aware of the possibility of a car being clocked and to report the matter to the Garda as soon as possible. Currently, someone who has sold a clocked car cannot be investigated if more than two years has elapsed since the sale, or if the garage he worked for has since closed down.

With cars becoming more reliable and robust, the old signs of clocking, such as wear and tear to interior trim, have become harder to spot, but the safety implications of buying a car with significantly higher mileage than it displays have not changed. Brake-pad and disc changes, and replacement of worn suspension, are high on the agenda for ensuring that your vehicle is as safe as possible on the road.

According to Cartell.ie, which can check a car’s history for potential purchasers, clocking is rife in Ireland, and has been rising steadily since the recession hit. Based on a sample of 50,000 used vehicles for sale, Cartell estimates that as many as 10 per cent have been clocked; the rate of 11 per cent for last November was the highest ever noted. It compares with a UK rate of about 6 per cent.

John Byrne of Cartell says: “We are hopeful the legislation will be enacted and enforced imminently and bring with it a significant layer of protection for consumers who are vulnerable to buying a clocked vehicle in Ireland.

“This should be considered a major advancement for consumer protection in Ireland and is a critical step in the battle to eradicate the practice of vehicle clocking in this country.”