The entry-level BMW 518d is priced to attract a new cohort of loyal customers, and though its output has been lowered, the 5 Series is still top of its class 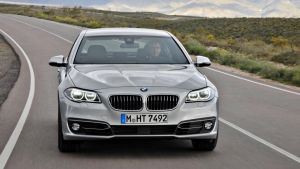 Years ago it was the Men in Mercs (and often in mohair suits) who held the power and the purse strings. In the UK in the 1990s, it was Mondeo Man who got Blair elected. Today in Ireland, it’s the Beemer Boys who seem to have ridden out the recession and are hoping to rise on the back of any economic recovery.

The BMW 5 Series has become the standard-issue corporate saloon for Irish executives, particularly those south Dublin middle managers who feel they deserve a little premium prestige on their driveways.

It was also the car that benefited from a bit of downsizing at boardroom level, as those used to cruising in the likes of the Mercedes S-Class or BMW 7 Series felt they would do their bit of slumming by moving down a grade.

Surely no one could claim they weren’t doing their bit after swapping the opulence of S-Class for the positively puritanical 5 Series?

There was a time when BMW’s 5 Series was strictly for the most senior of managers, but the car came of age around 2008, ironically just as the recession set in.

BMW was focused on reducing emissions at a time when our political leaders thought CO2 was something you found in bottled water.

As a result, when in July 2008 we moved to emissions-based tax on cars, BMW reaped the rewards of lower tax rates on its cars, both in terms of sticker prices and the annual stipend to the local authorities. Suddenly a 5 Series actually made financial sense, at least for some.

There were months when the 5 Series was actually the best-selling model on the Irish market; this at a time when the economy was collapsing around us. Imagine, as I’m sure many of the BMW executives have done on wet Mondays in March, what it might have been like if car sales had continued at 120,000-plus. The 5 Series could have become a more common sight than the Ford Fiesta on Irish roads.

But enough of the what-ifs. The fact remains that the 5 Series has long been the best of the premium saloons in terms of driving dynamics and agility.


Minor facelift
Now we come to the 518d entry-level model. With the introduction of a minor facelift BMW also launched the lowest-powered 5 Series on the market.

Don’t be confused by the numerals, for BMW long ago gave up on listing the engine size in the name. As with Mercedes, the numbers bear only a rather arbitrary relationship to the output of the car.

So the 518d is powered by the same 2-litre diesel as the 520d, but it has been detuned to 143bhp, a drop of 41bhp. That’s significant enough to raise some eyebrows and it’s reflected in a rather sedate 0-100km/h acceleration of 10 seconds. There are smaller superminis that pack more pace.

The benefits in terms of fuel economy are not that evident, either, because the official figures for the 518d and 520d are largely identical.

In short, the answer is probably not. There will be a certain fear factor about lowering the power output on such a large car, but behind the wheel you don’t really notice the drop. It’s no M5 but on the tighter back-roads its handling still sparkles and there’s enough power under your right foot to have some fun.

And in reality, the majority of potential buyers will spend 90 per cent of their time in the 518d commuting to and from the office.


Price the biggest draw
The biggest draw for the 518d is obviously the price. However, as with all premium brands, spend a little time on the options list and it can creep up significantly. It’s not as clear-cut as you might think.

The issue of price is a thorny one here. You may get a 518d SE for €43,380 (€44,230 on the road), but of course you will want a few more creature comforts. Our test car was the luxury specification, which as the name implies was already well equipped.

While BMW is making much of its ConnectedDrive system, whereby your car’s infotainment system gets full access to the internet for music, maps and several apps, perhaps the greatest gadget fitted to our test car was actually its new headlights. Headlights have not normally caught much of the spotlight for technology over the years, even when Xenon came along.

These new adaptive headlights from BMW, however, are pretty whizz-bang. Not only do they automatically dip for oncoming traffic or when approaching something from behind, but they seem to wrap around the other vehicle. So the road ahead is still washed with the strongest light, but it’s as if the car in front is in some sort of deflective bubble, shrouded in darkness.

It’s a little disconcerting the first few times you use it, but it must be particularly strange for those in the car in front, surrounded by light as if from above. For the privilege of this feature you will pay €813.43.


Nearest rival is Volvo
Rivals are evident: the new Mercedes-Benz E-Class is a quality performer, even if the smaller diesels are a little noisy, while Audi is offering some tempting financing deals on its A6 range. Lexus, meanwhile, has brought in a new GS300h that looks the part and boasts decent performance, even if it’s really not a price competitor for something like the 518d. The nearest rival is arguably the Volvo S80 with the D4 diesel engine, but add on Geartronic automatic transmission and opt for a higher grade specification, and the price starts to rise sharply.

If it’s a company car, then the 518d is a good option, particularly if you can raid the options list while staying within the fleet car policy. If it’s your own money then perhaps you might take a closer look at the 520d and the fact that the extra horsepower might prove more of a draw to secondhand buyers when it comes time to trade in.

The 5 Series remains top of its class and this new entry-level model is primed to push sales even further, creating an ever-larger cohort of Beemer Boys.

Peter Murtagh in the Americas: 'I’ve left behind something that’s going to get an awful worse'
Real news has value SUBSCRIBE