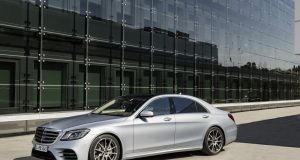 Rival cars from BMW, Audi, Lexus, Jaguar, even Maserati and Rolls-Royce put up a good fight (a very good fight in the case of the Beemer) but none can, ultimately, resist the steamroller effect of the Mercedes-Benz S-Class. For more than four decades, the S-Class (by whichever name it has been known) has been the definitive best car in the world and nothing’s changing in 2018. Except the S-Class, of course. It was mildly updated earlier this year, with a new (and very lovely) straight-six diesel engine for the S350d and S400d, and there are plugin hybrid diesel and petrol versions on the way, too. The interior looks, arguably, a little too close to that of the cheaper E-Class, but it’s still astonishingly comfortable, cosseting, and quiet. New, smaller, steering wheel really does ad to the dynamic experience, and the S-Class is surprisingly good fun to hustle on a winding road. Hot AMG versions and super-sumptuous Maybach models stretch your budget to breaking point, while the coupe version is just oh-so-pretty.

The 7 Series gets oh-so-close to being every bit as good as the S-Class, and only really falls at the last hurdle on two points - its exterior styling is not quite as well defined as the Merc’s, and its cabin is not entirely as quiet at a cruise as the S-Class’. Still, perhaps it’s a bit ridiculous to draw such small comparisons between cars at this level. By any standards, the 7 Series is a truly wonderful car. As BMW tradition dictates, it’s the drivers’ car of the segment, but fiddle with the air suspension settings and it’s as comfy and squashy as a mid-seventies Citroen. Diesel engines are lovely, but the 740e plugin hybrid makes lots of sense for city-bound business types. Silver-finish buttons on the dash look a bit naff, and you have to get the long-wheelbase model to get decent rear seat space. Which is surely the point of such cars. V12-engined M760 is a dragster disguised as a limo and really rather wonderful.

The latest A8 hits hard in this sector with some seriously impressive tech. There’s the twin-screen infotainment system with its haptic buttons that feel real when you touch them (but which still manages, to be honest, to feel a bit fiddly). There’s the 48-volt ‘mild-hybrid’ system for both diesel and petrol powertrains that gently nudges the A8 down the road to an eventual electric future. And there’s even claims of ‘Level 3’ autonomous driving capability, which could, theoretically, allow you to take your hands and eyes off the wheel for a while. Theoretically, though, because current legislation doesn’t allow it to be used. Ah well, just enjoy the A8’s handsome, chiselled, looks and its excellent comfort and refinement while you get on with the physical driving.

It’s knocking on for 30 years since the original Lexus LS knocked us all out with Mercedes-beating quality and silence that would trounce a Rolls-Royce. In that time, the successive versions of the LS have never quite managed to capitalise on that amazing start in life, but this latest version looks as if it could finally make good. It looks arresting, for a start - not pretty, perhaps, but with styling full of drama and intriguing detail. The cabin too is hugely impressive, and Lexus build quality still beats all-comers. The new 500h hybrid setup is more frugal and lower in emissions than the old L600h, but the relationship between throttle response, gearbox, and acceleration is still less than perfect. Still, it’s probably the only car here which will still be working perfectly, down to the last cabin switch, in three decades’ time.

Approaching its 50th birthday as a brand, the Range Rover became a true luxury car in 1982 with the launch of the first Vogue version, and it hasn’t looked back since. It’s now available with a choice of V6 and V8 diesels, V6 and V8 petrols, and now a plugin hybrid model too. There are standard and long-wheelbase versions, and cabin quality (previously a touch south of perfection) has taken a big step up for the 2018 model year. And, of course, it’s the only car here in which you can sit in perfect luxury and climate-controlled comfort, while outside is wall-to-wall mud, sand, mountain, or snow. It’s become a total cliché to say it, but it bears repeating - where other luxury cars get parked up, the Range Rover is just getting going. Now, if only Land Rover could truly convince us on the reliability front…

‘A new lockdown in Melbourne has shattered our spirits’
3