Top cars for 2020: It’s really well-built and easy to use, and the rear seat space is massive 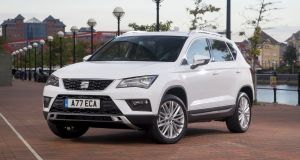 Of all of the multiple VW Group medium-sized family SUVs, it’s still the Ateca that gets our vote. You’ll find few criticisms here of the (mechanically similar) VW Tiguan or Skoda Karoq, but the Seat’s combo of keen pricing, decent dynamics, and pleasing styling still carry the day for this hugely practical crossover.

For a start, it has a bigger boot than most of its main rivals (such as the Hyundai Tucson and Nissan Qashqai), and that’s critical if you’re going to be constantly jamming it with family chattels.

The cabin may be a touch on the plain side but it’s really well-built and easy to use, and the rear seat space is massive (another key family metric). While it’s not quite as handsome as its seven-seat cousin, the Tarraco, it is still a very good-looking car, and it’s not half bad to drive, either.

You can spec it up with a big turbo petrol engine and four-wheel drive, if you like, but the best Ateca is actually the front-drive 1.5 TSI petrol. It’s a lovely engine, this - refined, punchy, and surprisingly economical.

Get it in well-specced SE trim and it even clocks in with a sub-€30,000 price tag. Ignore the silly high-performance Cupra Ateca, though. It’s not worth the extra outlay.

Sum up: As good a family SUV as you’ll find.