Michael Harding: Zen and the art of showing compassion to carrots

A lesson in empathy on the train to Sligo 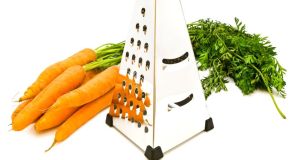 I was in a restaurant near St Stephen’s Green in Dublin last week, enjoying a panino stuffed with ham, cheese and tomato, when two young men came in and sat at the next table.

The waitress, a small, dark-haired woman, took their order and then delivered a soup to my table.

I said: “The weather has changed.”

She said, “In my country it’s already snowing.”

I asked her where she was from.

The two boys at the next table wanted fizzy drinks, so she took away the lunch menus and said she’d return with the drinks.

It was clear from their conversation that they had been on the tiles the previous night and they probably weren’t capable of digesting anything solid. Especially since one of them had spent the night drinking slops from glasses lying around on tables in a nightclub when other customers had gone for a smoke, or finishing off the dregs from glasses stacked on the bar counter.

“You were mental last night,” his mate whispered with great admiration. “I never thought you’d drink from the glass I gave you.”

Apparently there had been a cigarette butt floating in one of the abandoned glasses and his mate dared him to drink it.

“I bet you a fiver you won’t drink this piss,” he had said, but he lost his fiver.

Broken lives of the underclasses

Personally, if I was caught drinking slops from a strange glass I'd be a bit ashamed, but I suppose television drama has so mythologised the broken lives of the underclass that it's hard to blame young urban warriors for their mock-herioc deeds.

The Sligo train can be a kind of refuge after a day in the city. People board half an hour before the train leaves, just to get a good seat. Young girls use their phones to tell their mammies where they are, and women phone husbands to make sure they’ll be picked up at their station. Everyone nibbles at dainty muffins or chocolate bars bought at the kiosks in the station.

There was a man sitting opposite me with prominent teeth and a smile that implied a degree of bewilderment. He stared at me silently until we were beyond Maynooth. Looking out the window at the spire that rises above the trees in the old seminary he leaned towards me and spoke. “I’ve been on retreat this week,” he said.

“It was fantastic,” he continued. “Buddhists, vegetarians, yoga teachers and a lot of young women. We were practising compassion all weekend.”

“Yeah,” he said, his bewildered smile still in my face and his eyes glued to me.

Compassionate to the vegetables

“We were learning how to be compassionate to the vegetables.”

I was tempted to just stare out the window and ask no further about the matter, but after a pause my curiosity got the better of me.

I asked: “How do you practice compassion with a vegetable?”

“Well, first,” he said, “they told us to peel a carrot very slowly with a peeler. And then they asked us to imagine how the carrot felt.”

“Who do you mean by they?” I wondered.

“The Buddhists,” he whispered, as if we were in an episode of Doctor Who and Buddhists were evolved Daleks.

“Just imagine you’re a carrot,” he went on. “That’s how they do compassion: they imagine what it’s like to be the other person.”

“Or the other carrot,” I added.

“Yeah,” he agreed with the sincerity of a man whose soul has been rinsed clean of any irony.

“You imagine you’re the carrot and you get an idea of what it might be like if the blade was peeling your skin off.”

“And what happened then?” I asked.

“We ate the carrots,” he said. “After we had stewed them with potatoes and onions.”

Now we both looked out the window.

“What’s the book?” he asked, looking at a small history of Czestochowa on the table between us.

There was an image of the Black Madonna on the cover.

“It’s a town in Poland,” I said. “There’s a famous icon there called the Black Madonna.”

“The Black Madonna,” he repeated, half-confused.

“It’s an image of Mary and Jesus,” I explained. “A very sacred and holy icon, painted many hundreds of years ago, and everyone calls it the Black Madonna of Czestochowa.”

“Very interesting,” he muttered in an unconvinced voice. He lifted the book, glanced at the image and put it down again.

“Although, personally speaking,” he added, “I think I’ve outgrown that sort of thing.”