Michael Harding: I have often wished that I was a woman

Women are open because that’s the nature of connecting with other humans, whereas what makes me depressed is my inability to connect with anybody 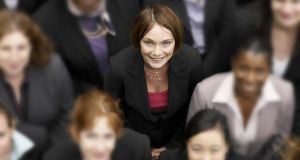 ‘It was humbling to be among so many women.’ Photograph: Thinkstock

I was in a room recently with 250 women. There were only two other men present, a waiter and a guitar player who plucked his guitar on the stage as the women munched fresh asparagus and the waiter served wine.

I was attending the Women and Agriculture Conference, an energetic gathering of farmers, and farmers’ daughters, farmers’ wives, and every other variety of woman involved in agriculture from the four corners of Ireland. I met shy women who kept their eyes to the floor, women with PhDs in sociology, women who run their farms like big businesses, and women stooped from years of carrying buckets.

I was the after-dinner speaker, and I spoke about how a man must first love his mother if he is ever to be capable of loving anyone else, and I suppose that encouraged people to fill my ears with all sorts of anecdotes later in the evening about love and parenthood.

One woman told me that when her father was dying he asked her to hold his hand. And she did. And then she kissed it, but he whispered from the pillow: “Please,” he said, “just hold it; don’t kiss it.”

That elegant and melancholic comment proved to be his last utterance.

Another woman told me that sometimes late at night when she’s alone in the enormous cream-tiled kitchen of her modern farmhouse, her son, a college student, arrives home unexpectedly. “He sneaks up on me,” she said, “and he puts his arms around me from behind and holds me for a few moments, and I love him for that.”

The following day I was walking down by the greyhound track in Mullingar when I bumped into the General, all clean-shaven and splattered with aftershave.

“You look shook,” he declared. “Where on earth have you been?”

I explained that I’d been at a conference with a large number of women.

“And what were you doing there?” he wondered. “You know nothing about agriculture and you’re not a woman.”

I suspected jealousy on his part.

“Of course I’m not jealous,” he protested, “but it’s a fair question; why wasn’t someone like me asked? I know infinitely more about agriculture than you do.”

“Ah,” he sneered, “so that’s it. The only reason they asked you is because they saw you on the television. How sad.”

“Not sad at all,” I replied. “On the contrary, it was humbling to be among so many women. In fact, I confessed to them publicly that at times I have often wished I was a woman, so that I too could achieve the emotional honesty that women display.”

“Don’t be ridiculous,” he sneered. “You’re so self-absorbed that if you were a woman you’d be in a convent.”

And I suppose he’s right. What makes women honest is their relationships, their connection with others, their dexterity when handling infants, and men who have zero emotional intelligence. They are open because that’s the nature of connecting with other humans, whereas what makes me depressed is my inability to connect with anybody.

I have lived my life in a shell, wasted years cherishing the belief that emotions should be kept secret, that vulnerability is a weakness, and that only in religious life should a man fully express the secrets of his soul.

So if I was a woman I would probably be a nun hidden away behind high altars of lace and incense. Alone in empty cloisters, on polished corridors, on bare floorboards or the waxed linoleum of some remote nunnery.

I went for lunch with the General to Red Earth.

There was a phone book resting on the seat, which I removed before sitting down. It was only as thick as a glossy magazine, and the General commented that you don’t see many thick phone directories nowadays.

“The undertakers must be very displeased,” he concluded.

“And what would the size of a phone book have to do with an undertaker?” I asked.

“Clearly you have had a sheltered childhood,” he said. “In my day, the first thing an undertaker did when he came into a house was to ask for a telephone directory.”

“To put under the head of the deceased, of course,” he said, laughing. His good humour had returned, and we both bent our heads to the dinner plates and paused only to exchange an occasional joke as we digested our noodles. All around us the well-polished women of Westmeath sat at other tables, in couples or clusters, sharing their hearts and speaking of things we knew nothing about.

Kathleen Swaine obituary: The ‘coolest, most beautiful cat in town’
3