Michael Harding: A man in the corner had tears in his eyes for some reason 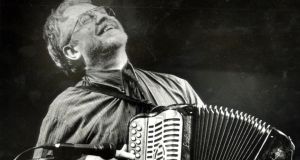 The master of the accordion, Tony McMahon (above) often repeated a single tune over and over again at concerts, using it like a chant, drawing people in. Photograph: Matt Kavanagh

I was trying to protect the firewood from the rain last week because I have no shed. I got scaffolding that had been lying in the grass since the builder left, and I made a frame and leaned it against the wall. I covered it with two pieces of tarpaulin, which worked so well that I was singing with contentment as I laboured.

The song in question was Young Alvin, about a boy who pines for a girl called Madeline, with all the usual consequences. Travelling people have been singing it for decades. I read somewhere that on a wet night in 1930 a man was bringing horses to sell at a fair in Ballyshannon and he stopped for the night with a family called Collins, who were camped near Ballysadare, and Mrs Collin’s daughter sang the song so beautifully that the man with the horses sat at the fire all night until he had learned it by heart.

The following day I was heading to Dublin on the train and two women – a big one and a small one – got on at Longford.

“The first night we were in Portugal,” the big woman said, “I thought the heat would kill him. And then at the dinner he insisted on having a duck.”

“Oh, dear me,” the little woman said, as if there was something obvious about duck that a man should avoid.

“He was sweating like a pig after the meal,” said the big woman.

“Sure what would you expect?” little woman said. “After a duck.”

“It’s like that cap he wears,” big woman said.

“The red one,” she replied. “It’s a woollen hat with a peak. He wears it everywhere. I don’t know how many times I’ve told him not to wear it. But he insists. Last week I hid it at the bottom of the laundry basket. He’s never been known to show any interest in laundry, so I reckon he’ll never find it there.”

“There’s no talking to them,” little woman said, and they both looked out the window at the drizzle. We were all listening to the voice on the intercom. “This is the train from Sligo to Connolly Station.”

“You’d think we were stupid,” the woman said. “Sure we know where we’re going.”

I was going to a reception and launch of a CD by Steve Cooney and the master of the accordion, Tony McMahon, in an elegant 18th-century house on Castle Street, just across from Leo Burdock chip shop.

Friends of the musician sipped wine and nibbled dainty bits of finger food while Des Geraghty did master of ceremonies, introducing various people to speak and musicians to play in honour of the great McMahon.

I used to watch McMahon on the television when I was young, but now that he has grown old and his hair has turned white there is a lightness in him, a graceful presence, and it filled the room.

“This is a lovely evening,” people remarked over and over again without knowing why.

McMahon leaned against a table, listening to the music. At one stage after a piper and an accordion player had done their set, he went over and whispered a request to them. He wanted to hear Tá Mé ’Mo Chodladh, which they duly played, and I noticed a man in the corner who for some reason had tears in his eyes.

In the old days McMahon used to take requests at concerts. Someone would shout up the name of a tune, and he would roll it out. One night he was asked to play a tune he didn’t like.

But he played it anyway. And when he was finished he said, “Actually it’s not a bad tune. Maybe I’ll play it again without prejudice.”

And off he went again at the same tune, this time playing it with love.

In fact, he loved the music so much that he often repeated a single tune over and over again at concerts, using it like a chant, drawing people in to it and arousing in them a sense of contemplative alertness.

I was there once or twice in my youth. Often with a girlfriend, money for beer, and a tent in the boot of the old Escort. But listening to the accordion music of McMahon could allow a man to live with his own loneliness. I remember concerts where his music dissolved the world for me, into a kind of liquid consciousness, as the entire audience leaned in towards the musician, like Travellers at a fire that radiates a powerful heat.