Sign of the Times: Economic uncertainty is doing little to quell consumer spending 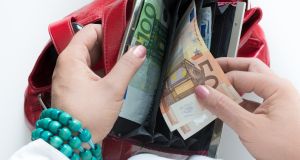 Just under half of those polled say they are just about getting by, with 14 per cent saying they are still really struggling.

“Just keep swimming, just keep swimming” seems to be the mantra of Irish consumers in 2019 as they do their best to keep their heads above choppy waters in the hope that they won’t be once again swamped by an economic tsunami like the one that flattened the hopes and aspirations of so many thousands of people more than a decade ago.

The people at Behaviour & Attitudes use the phrase, borrowed from Finding Nemo, in their report and (spoiler alert!), as anyone who has seen the Pixar film will recall, Dory’s dogged exhortation to the fish around her to just keep swimming in order to save the life of Nemo ultimately works.

But, instead of swimming, what Irish consumers seem to be doing as the country faces growing uncertainty from multiple directions is to just keep spending, just keep spending. More than 80 per cent of those polled say they plan to either spend at a higher level or the same level this year as in 2018 despite misgivings they have about the wider economy or their small place within it.

And there are many such misgivings.

People recognise that the health service is failing those who need it most and they believe the State is failing those who need homes the most. It is also clear that a shambolic Brexit is playing on the minds of many, with 64 per cent of people admitting to being worried about what effect it will have on the wider economy and 58 per cent concerned about the impact it will have on their individual circumstances.

At best the report exudes a sense of very cautious optimism, at least in some parts of the country – notably in Dublin and Cork – but at its worst there is a sense that things are not getting any better – with people in Connacht and Ulster particularly gloomy about what is coming down the tracks.

Consumers are aware of all the talk of an improved economy but despite the positive messages they hear, almost a third still say they have felt no benefit from any uptick the Government boasts about. Just under half of those polled say they are just about getting by, with 14 per cent saying they are still really struggling.

The research also paints an interesting picture of how Irish consumers’ spending habits are changing, although it appears they may not be changing quite as much and as fast as a widely held narrative suggests.

While there is much talk of a widespread consumer migration to the virtual world for all commerce, which is leading to the swift death of the bricks and mortar retailer, it appears there is life in the old dog yet.

Irish people are undoubtedly spending a lot of money in the online world – now topping €3 billion each year. But while online sales have taken off in some categories – notably in travel, sales of many more products remain largely confined to the real world.

When asked what they spend their money on online, the top answer was flights with 43 per cent of consumers saying they had used recently the web to find a way off the island. Just behind air travel, in the online shopping stakes is hotel bookings and that is equally unsurprising.

People are also comfortable buying shoes and clothes online but across other categories the scale of online spending dwindles.

Despite its obvious convenience, people have yet to warm to grocery shopping in particular with only one in 20 people taking out their laptop or smartphone to do their weekly shop. That either presents an immediate opportunity for retailers or an obstacle they still can see no way around.

In the mean time Irish consumers seem willing to do what they do best, which is to just keep spending.