Jobseekers at sharp end of problem of weak infrastructure

Rural areas have been particularly badly hit by the economic downturn 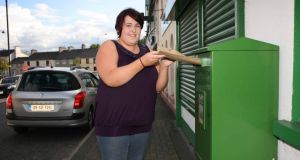 The agriculture advisory body also said poverty rates in small towns were twice that of cities, at 10 per cent compared with 5 per cent.

According to the recent report of the Commission for the Economic Development of Rural Areas (Cedra), rural areas have been particularly badly affected by the economic downturn since 2008, with an increase in unemployment of 192 per cent compared with 114 per cent in urban areas.

Living through those statistics is Emma Ward (23), from Coolaney in Co Sligo, who completed her Leaving Certificate in 2008. Ward worked in a local shop after school and completed a hairdressing course, before picking up employment as a hairdresser in Sligo.

In 2012 “it went quiet” she said, and she lost her job. Since then she has completed another course in hairdressing “to keep busy” and has been sending out CVs to businesses as far away as counties Longford, Galway and Mayo.

She said that although she has a car, “the further you go, the more worried people are that you might fall asleep in the car”. She said she has told potential employers at interviews she is prepared to move house “but they aren’t really listening at that stage”.

Another factor is that job hunting increasingly involves an online approach, she said.

“If you are filling out an application online or sending CVs through a slow internet connection you may get two or three done in the space that someone on a good connection can get through eight or 10,” she said.

According to the report Regional Quality of Life in Ireland 2013, published by the Central Statistics Office, there are striking disparities in employment between urban and rural areas. The report identified low levels of disposable income, high levels of emigration and a disproportionately ageing population in rural areas.

“I use educationpost.ie, which is brilliant to source jobs; and while there are loads advertised in Dublin, there would be only about three offering occasional days work in Mayo. I would like to find work somewhere near my home county.”

John Dwyer, a former councillor on New Ross and Wexford county councils, said New Ross never had a Fás office and the nearest office for Intreo, which replaced Fás, is in Wexford town.

“They can tell unemployed people to appear in Wexford to explain themselves at any specific time of the day – but there isn’t a bus and many unemployed people don’t have a car. I don’t know what they think you are supposed to do.”

Dwyer hopes to start a business renting canoes on the Barrow and Nore rivers, using a payment he got after 15 years as a councillor.

But having applied for a scheme which would allow him to retain his jobseeker’s allowance of €150 a week for the first year, he was told he would be given an answer when a committee met towards the end of August.

“It is frustrating. The bureaucracy is everything,” he said.