In fight for US Senate, women’s rights become a key battleground 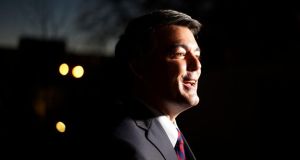 Republican candidate Cory Gardner: women’s rights, President Obama’s unpopularity, Ebola and the rise of Islamic State, are the most discussed issues in these elections. Photograph: Reuters

In one of the stranger negative campaign ads for next Tuesday’s US midterm elections, a young man scrambles from under a duvet in a bedside locker for contraception during an intimate encounter.

“Guys, guys, guys – if Cory Gardner gets his way,” the narrator says, “you better stock up on your condoms.”

Showing the couple frustrated, sitting on the bed, the ad declares that the Republican Senate candidate in Colorado – one of 36 Senate seats in play in this election – wants to ban birth control.

Produced by a Colorado pro-choice group, the ad is inaccurate. The US congressman has in fact come out in support of over-the-counter sales of birth control pills during the campaign.

He has also reversed his support for “personhood”, the belief that life legally begins at conception, which critics say will outlaw certain contraceptives.

The ad plays on his older, anti-women policies that Democratic rival, Senator Mark Udall, is using against him in the so-called “war on women” attacks by Democrats on Republicans in this campaign.

Women’s rights, along with President Obama’s unpopularity, Ebola and the rise of Islamic State, are the most discussed issues in these elections.

Republicans need to pick up six seats to regain control of the Senate in an election that looks like the party might improve on the 2010 contest when it added 63 seats in the House of Representatives.

The Democratic strategy of attacking on women’s issues is not making the same gains as in past elections. Republicans have been more moderate in their positions and careful in their comments.

There has been no repeat of the controversy of the 2012 campaign when Democrats made political hay on remarks about rape by Republican congressman Todd Akin (“If it’s a legitimate rape, the female body has ways to try to shut that whole thing down”) and GOP Senate candidate Richard Mourdoch (“Even when life begins in that horrible situation of rape, that’s something God intended to happen”).

“The fact that there have been no major gaffes by Republicans nationwide to allow the Democrats to exploit the kind of ‘war on women’ rhetoric that they did in 2012 is certainly not helping the Democrats mobilise women,” said Jennifer Lawless, director of the Women and Politics Institute at American University.

Women, a key voting block for Democrats, have been more likely than men to support the party’s candidates in presidential races since 1980 and Congressional elections since 1986. But a lack of enthusiasm among Democrats, regardless of gender, this year has them campaigning more on women’s rights to try to get out the female vote.

Obama won re-election in 2012 in part thanks to women; he beat Republican Mitt Romney for the female vote by 12 points. The trouble for Democrats this year is that women, reflecting general voting patterns, tend not to vote in the same numbers in midterms ballots.

The “war on women” attacks in Colorado certainly aren’t working. A Quinnipiac University poll on Thursday put Udall seven points behind Gardner due to the Republican’s whopping 21-point lead among men, while the Democrat has a lead of just six points among women.

“Aspersions that the Democrats used very effectively in 2010 are not working in 2014 because Cory Gardner is a much better candidate,” said Kyle Saunders, professor of political science at Colorado State University, comparing him with Ken Buck, the GOP Senate candidate in 2010 who stepped on “landmines” particularly on women’s issues.

Gardner is “appearing reasonable” by tempering his views on women’s issues from more conservative positions, he said.

Nationally, Hillary Clinton, the probable Democratic presidential candidate in 2016, has criss-crossed the country campaigning for Udall (twice) and other Democrats on women’s rights, from equal pay to freedom of choice on abortion to affordable birth control.

This is a shift from her 2008 presidential bid and may be a portent of a campaign to come. The former first lady sold herself six years ago as the best qualified candidate against an inexperienced Obama rather than playing up that she would be the first female president.

Things are different this time around. Making impassioned pleas to women at presidential-style rallies to vote on Tuesday, she is calling for gender equality in the broader context of improving the economic wellbeing of families, a major concern among voters since the Republican Party has turned more conservative since 2012.

Saunders expects Democrats to “really hit women’s issues” if Clinton runs in 2016 because of the gender gap the party enjoys.

“That is a natural advantage that Clinton should exploit,” he said. “The question is, is that enough with all the other advantages that the Democrats have nationally?”