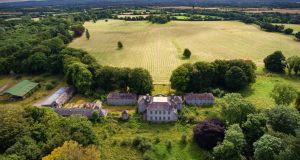 Landenstown Estate near Sallins, Co Kildare: significant investment will be required to bring it up to thoroughbred breeding status.

When Landenstown Estate near Sallins, Co Kildare, came on the market last September it looked every bit the Cinderella estate in the heart of a county celebrated for its pristine thoroughbred breeding lands. Despite its 338 acres, a Palladian country house at its heart and a bullish €6.5 million asking price, Landenstown was never the pick of the crop with a preservation order on the dilapidated house, an enforcement order from local authorities on foot of works carried out previously, and run-down lands.

But it turns out a handsome prince has emerged in the form of Gay O’Callaghan and Yeomanstown Stud, who purchased the property last week. Though the final figure has not been disclosed, it’s believed about €4.6 million was paid for the estate after Yeomanstown and one of the State’s biggest and most successful thoroughbred breeding operators engaged in the bidding process from early January.

Selling agent Roseanne de Vere Hunt of Sherry FitzGerald Country Homes remained tight-lipped about the deal. While the price achieved is substantially lower than the original asking of €6.5 million, de Vere Hunt is still likely to be very happy with the result. It makes it the second-biggest country property sale so far this year and, given the run-down state of the house and lands, it’s a sale that certainly benefited from having two potential buyers prepared to bid upwards for it.

Landenstown is a natural fit for O’Callaghan as it’s located only a few miles up the road from Yeomanstown, and a land bank of its scale rarely comes up for sale in the county. Significant investment over a number of years will be required to bring the estate up to thoroughbred breeding status, but it’s great to see the decline of this fine estate on the banks of the Grand Canal will finally be halted. What will become of the house is anybody’s guess.

‘The strutting farmer gripped my hand. I could smell alcohol on his breath’
8

‘You can be anything in Ireland now, except English’
10