Weaving the fabric of life, history and culture

Textiles are frequently ignored, simply because they are so fundamental. But this is changing 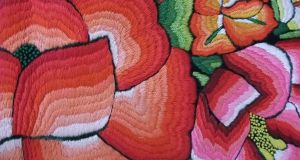 Embroidered stories: ‘Bordados’, an exhibition of Rebecca Devaney’s work based on her travels through Mexico is at the Mexican Embassy in Dublin

If any medium was the Cinderella of the art and design worlds – useful and everyday, yet capable of extraordinary beauty and conveying occasional wonder – it would be textiles. Look closer at the what is quite literally the fabric of our lives, and you start to discover stories, myths, histories, and out-and-out lies.

In one of those paradoxes that dissolve as soon as we pay attention to them, textiles are frequently ignored, simply because they are so fundamental.

This is changing. In the contemporary art world, artists are increasingly exploring what textiles can do and say. Yinka Shonibare’s exhibition this year at Carlow’s Visual traced the backstory of iconic and colourful African batiks to their Dutch origins, and in the process exposed the shifting of symbolism and merging of references that takes place in colonised cultures. If this kind of thing fascinates you, explore further with the book Cultural Threads, by NCAD’s Jessica Hemmings and, if you’re in London this summer, head to the Camden Arts Centre to see Making and Unmaking, which includes Shonibare’s work, alongside 70 other artists looking at the meanings that are communicated through cloth.

Fabric is the perfect medium for this, as it is the ultimate portable item. The one thing common to all fleeing refugees, migrants, travellers or other diaspora is the clothes on their backs.

As the fabrics travel, the exotic gets transferred to the everyday and prints and techniques migrate, reappearing in unexpected places, and in sometimes unforeseen ways.

In some cases, fabric can wear its secret heart on its sleeve. During the second World War, MI9 printed escape maps onto parachute silk, so servicemen and spies could sew them into hidden linings, and use them to navigate home.

Launching in early August, new Scottish design company Urban Reivers has made the very lovely Find Your Way Home range of silk scarves based on these maps (urbanreivers.com from about €99), connecting to ideas of home and history.

Such is the collective desire for narrative, sometimes, as with Shonibare’s faux-African Dutch fabrics, meanings get mixed up. Take Aran sweaters: in one of those popular misconceptions, which is so lovely you almost feel mean for exposing it, the stitches in Aran sweaters are not ancient family patterns, designed to identify the bodies of drowned fishermen.

The sweaters aren’t even that old; they don’t feature in Robert J Flaherty’s 1934 film Man of Aran, though they do finally appear for sale soon afterwards, with Patons of England publishing the first Aran knitting patterns in the 1940s. They turned up in Vogue in 1956.

The Paisley print is another example of cultural slippage. Named for the Scottish town that perfected the design’s mass production in the 19th century, its origins are Persian, with some scholars believing the leaf designs denote the Zoroastrian cypress tree, symbolising life and eternity. The pattern was brought to Europe as soldiers took home cashmere shawls, and the East India Company commercialised their import.

Patterns travel well and, as Paisley demonstrates, give us, if we’re patient enough to unravel the myths, an insight into the cultures of their origins, as well as their countries of adoption. Bordados, at the Mexican Embassy, Dublin, this summer, shows the results of Irish artist Rebecca Devaney’s travels throughout Mexico through the medium of embroidery. Whether it’s hand-knitting, sewing or embroidery, when every single stitch is painstakingly and individually set, it’s hard not to begin to buy into the idea of personality, faith and love being transmitted to the result.

The ultimate expression of that kind of thinking must be lace. In 2014, the DCCOI (The Design & Crafts Council of Ireland) exhibition Interlace, curated by Angela O’Kelly, showed lace being updated to contemporary fashion, glass and art by artists and makers including Natalie B Coleman, Rósín de Buitléar and Saidhbhín Gibson. From Christening robes to wedding dresses to funeral garments, lace has traditionally marked the passages of our lives. It is also contradictory. The lace on Communion gowns and saucy knickers has, one would hope, entirely opposite meanings. Flowing lace cuffs on men’s shirts indicated that they never had to sully their hands with physical labour, while lace gowns spoke similarly of the wealth of their female wearers. And yet, Irish lace was introduced to this country by nuns returning from the Continent with samples of Venetian and French lace. In another of those uncomfortable examples of extreme beauty arising from unspeakable times, it was then developed to create employment during the Famine.

Thinking about the rich potential of fabric makes me reconsider some of my wardrobe choices. Alongside attempting to be ethical in where I shop, trying to be knowledgeable enough to draw the line at factories that profit from child labour, it would also be good to include one or two more handmade items. Those pieces that carry story and love in their stitches. Even if it is just a pair of knickers.

Bordados is at the Mexican Embassy, Dublin until July 29th, rebeccadevaney.ie; see more Irish textiles at The Way We Wore, ongoing at Collins Barracks museum.ie; Making and Unmaking is at the Camden Arts Centre until September 18th, camdenartscentre.org; Cultural Threads by Jessica Hemmings is published by Bloomsbury, (about €32).