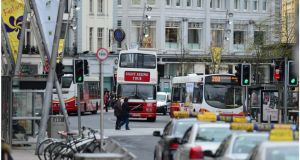 Cork has the second biggest growth in property sales according to new figures. Photograph: Bryan O’Brien 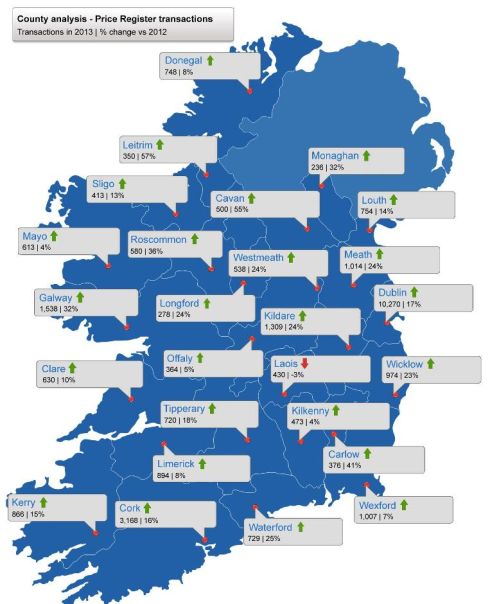 The recovery in the property market is no longer confined to Dublin and the larger metropolitan areas. New data shows that it has started to spread across the country, with the number of property transactions increasing in all but one county last year.

According to figures compiled by myhome.ie from the property price register, transaction levels rose right across the country in 2013 – albeit from a low base – with just one county, Laois, reporting a drop in the level of activity. Counties which reported a strong rise in transactions include Leitrim (up 57 per cent to 350 sales); Carlow (up 41 per cent to 376); and Cavan (up 55 per cent to 500).

“Transactions are increasing, and it’s not just in urban areas. It has moved out to the commuter belt,” says Angela Keegan, managing director of myhome.ie, adding that she expects 2014 will see a further increase in transactions as more second-hand homes come on the market. However, the construction of new developments will need to get off the ground before transaction levels reach the 70,000 to 90,000 a year that would indicate a “normally functioning market”, says Keegan.

According to the figures, some €3.6 billion was spent on property in Dublin last year, as rising prices saw the amount spent on property jump by 34 per cent, despite an increase in transactions of just 17 per cent. In Dublin, the average property price was €350,535, pointing to ongoing demand for family homes as opposed to cheaper apartments, while Castleknock was the busiest suburb in the county, with 304 sales.

Dublin accounted for around a third of all sales in the country last year, with counties Cork, Galway, Kildare and Meath together accounting for around 25 per cent of all transactions.

Of the five busiest counties last year, Galway reported the strongest rise in sales, growing by 32 per cent to 1,538 sales, corresponding with a 25 per cent increase in values, up to €242.5 million. The average price of a property stood at €157,672 over the year.

According to Niall Browne of local estate agency O’Donnellan & Joyce, the jump in Galway transactions was so high because it came off such a low base, with particularly low levels of activity in 2012. In 2013, however, the market was fuelled by “a surge” of buyers coming back into the market, despite the constraints on supply. This in turn pushed up prices. For example, says Browne, a four-bed semi-detached property in Galway’s city centre would have cost about €190,000 back in 2012. Now, he says, such properties are most in demand, selling for between €250,000 to €260,000.

While Browne doesn’t foresee “a sudden surge” in supply to help meet demand, he does expect transaction levels to double to around 3,000 in Galway city and county this year.

While the survey shows that the recovery is starting to spread outwards from Dublin, in some areas the market remains more volatile.

In Co Laois, for example, the volume of transactions actually fell in 2013, down by 3 per cent to 430, with Portlaoise accounting for almost 40 per cent of these transactions. However, prices are on the rise in the county, with the value of properties sold up by 1 per cent, despite the lower number of transactions.

The biggest price drop was reported in Co Offaly, where, despite transaction volumes rising by 5 per cent to 364, the amount spent on property fell by 8 per cent to €37.1 m. The average price of a property sold in the county last year was €101,923.

BY COUNTY: PERCENTAGE CHANGE IN TRANSACTIONS 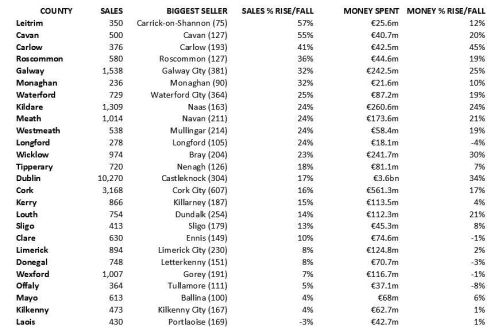 Live in Marlfield elegance in Wexford for €890,000

The best gourmet getaways in Ireland this summer
8

Can I put up a fence and force my neighbour to spend on a survey?
10