Priced out of Castleknock? Go Lucan around nearby

An early spa resort, Lucan is a commuter village with a good supply of family homes 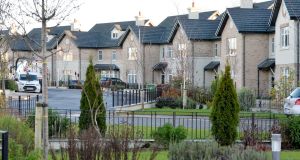 It was a spa that first brought droves to visit Lucan in west Dublin in the 1750s, after a health resort sprung up around Chapel Hill. In those days Lucan was the home to Patrick Sarsfield, hero of the siege of Limerick and the first Lord Lucan. His demesne later became the site of Lucan House, a grand palladian villa dating from the 1770s and home, since the 1950s, to the Italian ambassador to Ireland.

The Lucan Spa Hotel, perched high atop the N4 as one exits Dublin, is often overlooked as a destination though it’s an old style gem offering guests a bolthole on the west edge of the city. In much the same way, Lucan itself is overlooked as a neighbourhood, not least for buyers looking to chip a wedge off housing costs, with house prices considerably less than in desirable Castleknock, which is a similar distance to Dublin.

The prettiest village centre in west Dublin
Lucan is brimming with excellent eateries and pubs. Kenny’s, Courtney’s, the Ball Alley House and O’Neill’s – in a notable mock-Tudor-style building – are all well-established and respected watering holes, while Carroll’s Gastropub, a new addition, serves an excellent all-day menu. Add in hipster-joints - Coffee Works café, and the Grafton Barber, as well as all the other necessaries for county Dublin living along the banks of the Griffeen River, which runs through the heart of town, and you have a good setup. To the very east of the village, in a land pocket surrounded by the curving roads of both the N4 and M50 you also have the Liffey Valley Shopping Centre, with cinemas, clothes shops, coffee shops and restaurants giving it that US-style shopping mall experience.

Place of the elms
The Irish for Lucan is translated as leamhcán or place of the elm trees and thankfully the area has held onto that notion of greenery. Again, it’s one of the areas of west Dublin that has been best-zoned to retain green space alongside large-scale construction. The pick of the bunch in this regard is St Catherine’s Park, which straddles the border with Co Kildare, and spans 200 acres with the River Liffey running through its southern end. Further east in Lucan, amongst the more residential areas of the town are Griffeen Valley Park and Ballyowen Park, which offer green respite from what is the most-build-up part of the town, yet least serviced by shopping and cultural facilities.

What’s the housing stock like?
Old Lucan, around the village centre, has a variety of builds, from period homes right through to turn of the 20th century and 1950s homes. As Lucan expanded, largely to the south and east, a number of estates sprung up in the 1970s, but it was during the boom years of the late 1990s and early 2000s that the area mushroomed in size with swathes of usually three-and four-bed semi-detached homes built to cater for families moving into the neighbourhood.

“The building of new stock ended around 2008 with the crash and when the economy began to pick up again in 2013 we had a serious shortage,” says Barry McDonald, owner of REA McDonald. “That has begun to change in recent years, with the Adamstown area, for example, being developed.”

Any new developments?
Around Adamstown, which is southwest Lucan, two developments are currently under construction.

“The Somerton development is being built by Castlethorn, which is going be launched in spring 2018,” says James McKeon, DNG’s Lucan branch manager. “They’re going to be a mix of three-bed terraces moving right up to five-bed detached homes. The price range will be €320,000 right up to €575,000.

“Shackleton is being built by Cairn Homes – off the Dodsboro Road. That comprises three-and four-bed semi-detached homes. Now quoting at €315,000, but when they launched they were €295,000, so they have jumped up in price in the last six months,”says McKeon.

Adamstown train station was built to the get commuters into the city but there has not been lot of commercial development around Adamstown in recent years. The Lord Lucan pub is in the area and also the very beautiful Finnstown Castle Hotel, but if planning goes ahead for further housing developments, high-quality commercial zoning needs to be incorporated.

At the northwestern side of Lucan there is a third development in the works, focusing on higher-end builds with an accordingly higher price tag.

“At the more premium end of the market you have Rokeby, which is being developed by O’Flynn’s,” says McKeon. “That’s up towards St Catherine’s Park. They have a limited supply of phase ones still available – a mix of four and five beds between €750,000 to €820,000. That’s the top end of the new builds in the Lucan market.”

There are also smaller developments located closer to the town, including five three-bed properties, to be sold by Lisney, on Tandy’s Lane, which will launch in spring 2018, for about €450,000. DNG are also developing a site behind Collins’ butchers on Main Street, with planning for one four-bed detached, two four-bed semis and six two-bed apartments.

The land parcel running south of Lucan, along the Kildare border, and twisting across towards Newcastle and Baldonnell, also contains the strategic development zone, Clonburris. This new town is one of the key developments in addressing the medium-term housing shortage with 8,437 planned new homes to the west of Adamstown train station.

Getting there
Lucan’s location places it on the N4 and also a short drive to the M50, meaning in theory it is an excellent location for most needs. The westerly location means access to the rest of the country is very good, while the M50 brings commuters into contact with the other satellite towns around Dublin city. The N4 into Dublin, via Heuston Station, is rammed at rush hour which slows down journey times between 8am and 9am and then again between 4pm and 6.30pm from Monday to Friday. A quality bus corridor running along the N4 means public transport is often the better option for commuters, while the further development of Adamstown train station could be a major answer for many commuters.

A multi-cultural village
One of the major positives of Lucan is its multi-culturalism. This is not merely a white, middle-class town, it has a wonderful ethnic diversity throughout the wider area and that is seen through housing sales. DNG indicates that up to 25 per cent of their buyers are non-nationals, citing many Chinese and eastern European buyers, while REA McDonald says as much as 40 per cent of their buyers are not Irish by birth, with a number of Pakistani owner-occupiers now living in the town.

For Rent
Three-bed, three-bath semi-detached at St Edmund’s Square for €2,150 per month. Agent: Hooke and McDonald.

Four-bed two-bath, semi-detached for €2,500 per month at Beechpark. Agent: Nationwide.