Peonies, favoured for their blooms, are long lasting plants that can survive for decades 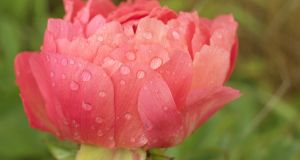 Resolve. Fortitude. Stoicism. If ever there was a gardener who served as a poster boy for such qualities,

it was the late Koichi Itoh, the Japanese nurseryman who spent much of his life attempting to achieve the seemingly impossible, which was to cross a tree peony with an herbaceous peony.

In 1948, after thousands of failed attempts stretching across several decades, he finally succeeded. The result was nine tiny hybrid peony seedlings that combined the very best characteristics of both parents in being hardy, vigorous, long flowering, floriferous and disease-resistant, with handsome foliage. Not that Itoh ever got to see them in bloom. By the time his fledgling peony plants reached flowering size, the Japanese nurseryman was long dead.

Intriguingly, it’s not impossible that some of his original plants survive to this day. All peonies – not just Itoh’s intersectional hybrids, as these kinds of remarkable hybrid peonies are now known, but also the true tree and herbaceous types – are exceptionally long lived, surviving for many decades. There are even accounts of some plants living for more than a century.

But admirable as it is, the peony’s remarkable longevity is not the reason for its enduring popularity. Instead it is the flowers, which appear in late spring/summer, that are most prized by gardeners and flower arrangers, both for their size and extraordinary beauty.

Those giant, graceful, scented blooms have been the centrepiece of countless wedding bouquets, as well as the subject of numerous paintings; some of the famous artists prompted to capture the peony’s blowsy beauty on canvas include Renoir, Gauguin and Fantin-Latour.

As for flower colour, Koichi Itoh’s original hybrid plants produced giant papery blooms in shades of golden-yellow, but there are thousands of varieties of peony available today, with flowers that come in shades of blood-red, carmine-pink, lemon, orange, cream, coral and snow-white.

The petals of some are even flared, streaked, gently dappled or gaily striped, while with others such as the herbaceous ‘Sunset’, the colour changes as each bloom ages.

When it comes to growth habit, Itoh-type peonies (or the ultimate peony, as many now describe them) behave in a similar fashion to their herbaceous cousins, dying almost right back to the ground in winter before reappearing in spring to produce a rounded clump of foliage followed by strong-stemmed flowers from late May to June.

Depending on the particular variety, these plants can reach a height and spread of 80-100 centimetres. But the true tree peony, species of which include P. delavayi, P. suffruticosa and P. rocki, sheds its leaves in autumn while retaining its woody structure throughout the year.

These short-flowering, slow-growing, woody plants can reach a height and spread of up to two metres by 1.2 metres and flower from early April until late May. Whilst hardy once well established, they are more vulnerable to cold winds and spring frosts than the Itoh-hybrids or herbaceous types.

The best time to move or plant any of these peonies is now, in October, while the root system is dormant and the soil still retains some warmth. Choose the spot carefully. All types of peony require a deep, rich, moisture-retentive but free-draining soil, but the Itoh and herbaceous types like a spot in either full sun or light shade, while tree peonies will tolerate deeper shade.

As for any plant with such an exceptionally long lifespan, careful soil preparation is key. Before planting, add plenty of organic matter, along with a little seaweed meal and a handful or two of organic granular fertiliser. If your soil is inclined to heaviness, improve drainage with the addition of some horticultural grit.

Peonies also like a slightly alkaline soil, so if yours is acidic, then integrate a handful or two of garden lime into the soil before planting.

Soil and aspect aside, perhaps the most important thing with Itoh and herbaceous type peonies is to avoid planting too deeply. Phil Havercroft, owner of Wicklow-based Leamore Nursery, which specialises in these plants, recommends planting to a depth where the bud (the top of the plant crown) is barely below the surface.

“No more than one to two centimetres. But with tree peonies, plant at a sharp angle (almost horizontal) and to a depth where the graft (visible as a join between rootstock and the rest of the plant) is at least eight centimetres below ground.”

For best results, he also recommends top-dressing with a general fertiliser after flowering.

As befits a peony-expert, Havercroft he is in awe of these beautiful plants’ longevity. “Give them the right soil in the right spot in the garden, and you can expect your peonies to outlive you.”