Town and country: three-bedroom bungalow in Stillorgan or 1970s ‘fortress’ in west Cork 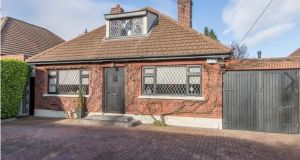 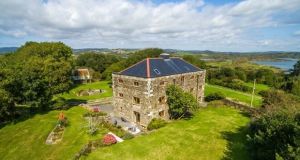 The Fortress, Foilnamuck, Ballydehob, Co Cork is situated between Schull and Ballydehob and has views over Roaring Water Bay.

This 162sqm (1,744sq ft) bungalow (including attached garage and utility) has three bedrooms on the ground floor along with the bathroom, separate shower room, living room with fireplace and kitchen/dining area. The attic has been converted into a living space, although a bedroom or two could be added in instead. The house is in a cul de sac near Clonmore Park. The large garden contains a timber cabin and there is a drive to the front. BER: E1.
Plus – Lovely big garden.
Minus – The hall creates dead space between the kitchen and living room – it has already been opened up a bit but more could be done.

Despite appearances, this stone structure was built in the 1970s. The thick-walled house sits on 2.3 acres between Schull and Ballydehob and near the water, with views over Roaring Water Bay. Despite the relatively recent build, the house has traditional features such as tiled and timber floors, oil fired Aga cooker, solid fuel stove, and exposed stone walls and timber beams. On the ground floor is a kitchen, pantry, sitting room and bedroom with en suite. On the second floor is a livingroom, bedroom/study, double bedroom and a bathroom. The third storey is an attic. There is a workshop and a stable block in the grounds. BER: E1
Plus – Spectacular setting and beautifully presented.
Minus – The windows are not very big.