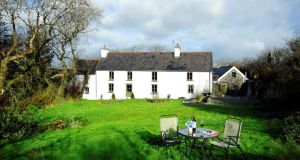 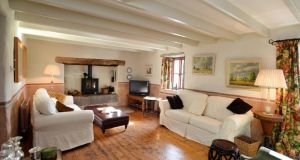 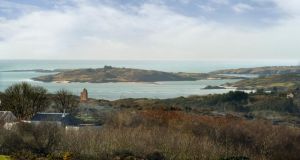 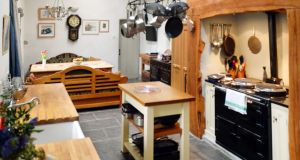 Tucked away down a boreen two miles inland from Roaring Water Bay in Aughadown, west Cork, Land of Lyre is a picture postcard farmhouse set on three acres. The simple exterior conceals a very smart refurbishment undertaken in the early noughties by previous owners Denise and Pádraig Cusack (brother of actor Sinéad Cusack and son of actor, writer and producer, Cyril Cusack).

Experienced renovators, they gutted and reworked the original farmhouse and extended outwards into the former milking parlour and pigsty.

Using local building expertise, all the touchstones of a typical Irish farmhouse were celebrated – exposed beams and stone windows, slate windowsills and an Aga set in an elm arch.

Clever contemporary additions include a long timberframe lantern window at the apex of the kitchen, four roomy first-floor bedrooms, including one with en suite, a solid fuel stove in the livingroom, and a shelf-lined study.

Outside, a courtyard links the stone outbuildings in a mature garden setting with raised stone flower beds and traditional drystone walls. Added to this is a paddock and a field with a Polytunnel, orchard and fruit enclosure.

Bought for €750,000 in 2007 by current owners Gerry and Valerie Stevenson, they made their own improvements, including upgrading the heating system and installing a new kitchen. They’ve enjoyed living at Land of Lyre immensely but are now looking to downsize locally. The 2,500 sq ft (232 sq m) property is on the market for €640,000 through Maeve McCarthy of Charles McCarthy auctioneers in nearby Skibbereen.