Upgraded Georgian tucked away from Blackrock buzz for €1.05m

9 Anglesea Avenue has walnut floors, louvred shutters and a private back garden 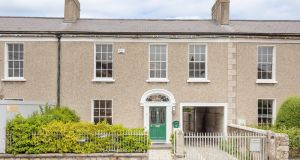 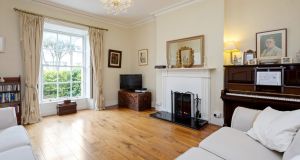 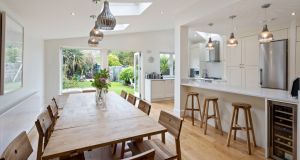 Anglesea Avenue is just a short walk to Blackrock village but feels very detached from the busy N31 which you cross to get to the main street.

The owners of number 9, a mid-terrace Georgian house with a lovely fanlight over its leaded glass-panelled front door, bought the property in 2014 for €630,000 and set about extending it. They added a double storey to the rear of the protected structure to create a better sense of flow throughout.

The formal sitting room off the walnut floored hall is a nicely proportioned room. It too has walnut flooring and six over six pane, single glazing on the shuttered window. It is simply laid out, with an electric fire and ceiling heights of over 2.8m.

Steps lead down to the living/dining/kitchen area, a large L-shaped space where the living area is lower set, giving it a cosy feel. The dining area overlooks the garden through a large picture window with a window seat framing the view and the table lit from above by a trio of roof lights.

The original return of the house can be seen at the entrance to the kitchen area, where there is a breakfast bar to the left and a bank of wall units to the right. The layout smartly breaks the large 6m wide space into task oriented zones.

While north-facing, the garden is broad and given the low nature of the boundary granite walls it gets both eastern and western light. It also feels private and pedestrian and vehicular gates mean bins can be kept around the back. There is a mews house to the rear with vehicular right of way access to this lane.

The original fanlight in the family bathroom on the hall return brings in light while a second window overlooking the garden has louvred, privacy shutters. A clerestory window on the exterior wall brings in more natural light. It is a luxurious space clad in white marble tiles with a separate shower and freestanding bath. The first of the property’s four bedrooms is also at this level. These are all doubles.

There are three more bedrooms on the first floor. The main is to the front and interconnecting doors lead from it to the rear bedroom, a nice and accessible touch if you have small children. Parents of older kids might like to close these off. The third double is a large room to the front.

The property, with off-street parking for one car out front (rare in these parts), measures 180sq m / 1937sq ft and is BER exempt. It is seeking €1.05million through agent DNG.

Next door, number 11, a mid-terrace Georgian, which is currently undergoing refurbishment, including a single storey extension to the rear, sold last July (2019) for €730,000, according to the property price register. It had come to the market in August 2018 seeking €845,000.