This townhouse terrace has been upgraded by documentary maker Lorelei Harris 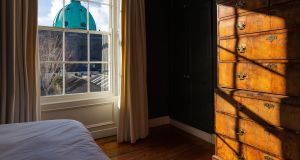 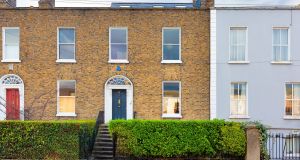 There is an immediate feeling of warmth on entering 36 Mountpleasant Avenue Lower in Ranelagh. The yellow ochre walls are reminiscent of the gentle heat of a late summer’s evening. It is surprising that this colour, a favourite pigment of Renaissance artists is not used more in period houses, as the colour itself besides generating a sense of warmth, is also said to stimulate our mental agility and perception.

The house has been home to Lorelei Harris and husband Prof James Wickham since 1988, when they moved to number 36 just 12 steps from their former home across the road. “We were looking for a larger house for our family, and it was the Venetian window in the hall and the back garden which resembled a meadow at the time that won us over,” says Harris.

The house when purchased was in rag order – with a warren of rooms at garden level and the bathroom on the return cantilevered on rusty girders. The couple engaged architect Angela Jupe – who has since turned her hand to garden design – to rearrange and renovate the property.

A fourth storey was added to the top of the house, though it is only noticeable from the rear garden, where the new A-frame breaks the roof line of adjacent houses.

The trade-off was that the imposing arched window upstairs is now slightly blocked by the full stair case running to the top floor, but what was added gave two spacious bedrooms and a large family bathroom. The views from the rear bedroom stretch all the way to the Dublin Mountains across the chimney pots and church spires of the city skyline.

“The house is built around storage and bookshelves,” says Harris of their 245sq m (2,637sq ft) home. Both Harris and Wickham have a study each in the house, and both rooms are polar opposites of each other. Prof Wickham, until he retired five years ago was Jean Monnet Professor of European Labour Market Studies and Professor of Sociology at Trinity College Dublin. He now leads the Working Conditions in Ireland project at the Dublin think tank Tasc; a forum addressing inequality and sustaining democracy. His study, sits atop the curved extension to the rear. Painted in pale tones with exposed beams across the high pitched roof, the views through the picture window are those of the back garden.

Extending to 46m (150ft) and one of the larger gardens on the road – thanks to the curvature of Fortescue Lane lying to the rear – it is laid out with what Harris describes as a series of “different rooms” along a meandering pathway. Testament to its care and attention is the absence of a single weed among the swathes of shrubs and trees in the herbaceous borders.

Though most plants are currently dormant, the first signs of Peony roses, ferns, grasses and Clematis are beginning to emerge alongside an impressive Clianthus puniceus – currently displaying its vibrant clusters of lobster-claw-like flowers.

The end of the garden opens on to the lane – essential for garden maintenance – and there was planning for a garage, which has since lapsed, although there is precedence for same along here.

Harris’s study lies in what was originally a bedroom on the first floor. Painted in a sombre gunmetal grey with Chartreuse green lacquered floors, it overlooks the line of period houses across the street – including the couple’s former home.

A native of South Africa, Harris met her husband while completing a PhD in anthropology, but “got hijacked into media” to become an award-winning documentary maker. From there a lifelong career in RTÉ led to her role as head of arts and cultural strategy at the state broadcaster. She spearheaded Documentary on One – which boasts the largest library of documentary podcasts in the world. She now works as an independent cultural and media consultant.

Along with the garden, size of the property and its location, is the view of the dome on the Church of Mary Immaculate, Refuge of Sinners in Rathmines that is really breathtaking. “We never close the shutters in this room” says Harris of the rear drawing room at hall level “when the dome is floodlit at night, you feel like you are looking at Venetian architecture, and it feels like another room out there”.

Though not Venetian, the dome dates from 1922, when the church – originally erected in 1854 – was destroyed in a fire. It is purported to have been built in Glasgow and originally destined for St Petersburg, but due to the Russian Revolution in 1917 the order was cancelled. Despite no official documentation to substantiate this theory, and whether or not it is an urban myth, the fact remains that the views from some of the rooms in this house are of one of the most recognisable beacons on the Dublin skyline.

The property has four bedrooms – including Harris’s study, and what would have been a fifth is now the family bathroom on the first floor. At garden level lies the kitchen, a further drawing room – providing three in total – and a large utility with oodles of storage.

While new owners may want to amalgamate the two rooms at garden level – the couple kept them separate as a space for their family growing up. This house is much larger than its peers along the road due to the addition of the upper floor.

But it is really the extent of the rear garden and the commanding view of the dome – the very reasons that Harris and Wickham fell for the property originally, which will attract the next owner.

The house is for sale through Sherry FitzGerald with an asking price of €1.45million.

Sunny side out in tropical Sandymount semi for €1.595m
Real news has value SUBSCRIBE