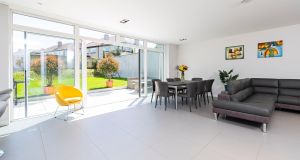 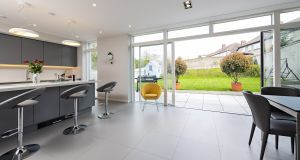 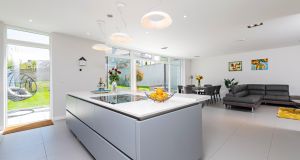 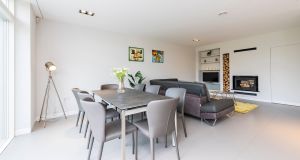 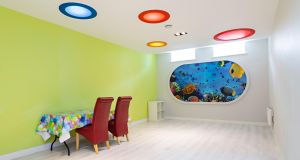 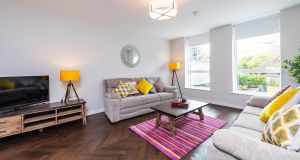 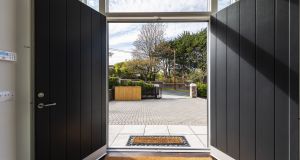 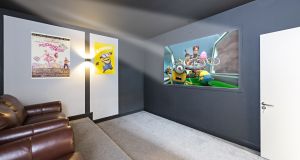 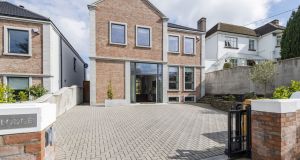 Woodside Drive, along with its neighbour Hillside have earned a reputation as “millionaire’s row” in Rathfarnham. Houses, mostly detached, stand on large sites with the added attraction of the exclusive Castle Golf Club at the end of the tree-lined avenue. In fact Rathfarnham appears to have the highest density of golf clubs it the city, with no less than six for residents to enjoy.

Number 2 Woodside Drive, a 1960s bungalow on a significant site, was purchased in 2014 for €800,000. The buyer – an engineer – then built two 398sq m (4,284sq ft)properties on the site. Designed by ODKM, the houses stretch to more than four storeys inside – but from the outside appear to be on just two levels.

“We removed 6,000 tonnes of topsoil before we started to build, such was the incline on the site,” says the owner. With the aim of building two passive houses, a focus on insulation was paramount: “The idea was based on the concept of a thermal flask – essentially the houses are like storage heaters retaining vast amounts of heat, the incoming air passes through two filters – extracting impurities and pollen.”

The entire house is insulated – even the foundations have foam glass insulation costing more than €12,000 per house for the foam alone.

In addition the windows are triple glazed AluClad, allowing for a BER energy of A. The fact that the property is mass concrete also gives excellent sound proofing over the four floors.

At basement level there’s a home cinema, vast playroom, a utility with an abundance of storage, in addition to what is becoming de rigueur with high-end builds: a custom wine cellar.

Also at this level is a large home gym with a mirrored wall for those who like to keep an eye on their abs when working out.

On the ground floor, just inside a tall entrance lobby is a family room – with a hidden door to the large room at the back of the property; an open plan kitchen living and dining space.

Interiors of the property, number 2A – for sale through Savills with an asking price of €2.25m – were designed by architect Declan O’Donnell of ODKM, former judge on the television series Home of the Year.

The Kube kitchen features a retractable extractor fan to give a streamlined effect and has a utility – to the same standard – adjacent.

Everywhere in this house seems bigger than average. All four bedrooms are spacious and the family bathroom could accommodate a football team.

The back garden could do with some tall planting for privacy, and is not as large as its peers on the road, but local amenities include nearby Badgers Glen and Dodder Walk.

The surprise is the top floor, where an office, bathroom, shoe storage area and further reception room are located. Views provide a peek at Ely’s Arch through a wall of pine trees – the ultimate Roman juxtaposition to the contemporary architecture here.

The owner and his family have lived here for a couple of years and are now moving to their other newly built house next door.

TikTok boom: The app exploding in popularity among Irish teenagers
4

Perfect chicken schnitzel: it’s all in the breadcrumbs
Real news has value SUBSCRIBE