Suntrap living on a Dublin 1 hideaway street for €435k 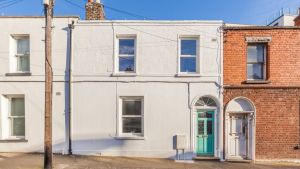 Blink and you’d miss Langrishe Place, a charming terrace of 19th century houses with a castellated church building at the end. Built as a Wesleyan preaching house in 1826, it has since had varied functions and uses including as a public health dispensary, a primary school and a social hall where between 1918 and 1922 writer Sean O’ Casey was its caretaker. His friend Delia Larkin, a trade union organiser and sister to Big Jim Larkin, owned the property for about 15 years and it was used then as a worker’s theatre and for bingo fundraisers.

As to how it got its name you have to delve further back into the archives. The plot of land was purchased by a Christopher Smith from Sir John Eccles in 1711 but it was 85 years later when it was bought by MP and Reverend, the right honorable Hercules Langrishe, that it took his name.

Number 6 is a mid-terrace, two-bed of 85sq m (915sq ft) on the east side of the street. The house has been gently modernised by its current owner whose upgrades include internal insulation so that it now has a D2 BER rating. Its square shaped sitting room to the front is a good size with an open fire and a roomy ceiling height of 2.7m.

To the rear is a dual-aspect kitchen and while bounded by a high granite wall and overlooked to the back by the student accommodation of Beckett House, it feels bright and airy. White units, a smart dining table and flooring all helping to bounce light around. Double doors open out to an L-shaped yard that the owner says is a suntrap during the summer months.

The first of the two bedrooms is on the return. There might be scope to install a door out to a small terrace to bring more morning sun in, for the property next door has already added a balcony at first floor level.

The main bedroom and family bathroom are on the first floor. Both are of a very good size. The property is seeking €435,000 through agent DNG.

Across the street SherryFitzGerald has sale agreed an E2 BER rated, three-bedroom house of 90sq m (968sq ft), where one of the bedrooms is downstairs. It had been asking €495,000. Number 16 was auctioned this week. At 110sq m (1184sq ft) it was larger than most of the other properties on the street but the double fronted house, sub-divided into three apartments, needs a substantial upgrade.